We ordered a bread basket, which came with Naan, onion Kulcha, and Puri. 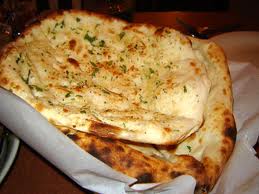 The least popular was the puri, which the kids thought was great fun to look at, as it came out like a large balloon on the plate, but once the balloon was deflated, it sort of became a soggy, flavorless bit of bread that no one wanted to eat. 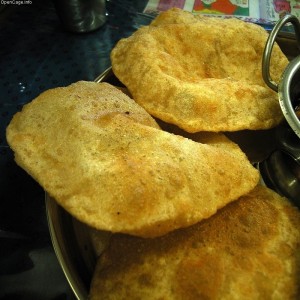 The favorite by far for me was the kulcha.  I expected an overwhelming onion flavor, but I was so pleasantly surprised!  The onion added only a sweetness to this warm, delicious bread, and while I had been hoping to save my appetite for a pumpkin scone at the British pub a few doors down, I quickly gave up that idea to indulge in way more kulcha than I should have.  It was that good.

The Naan was typical, warm and delicate in flavor.  The kids ate it up.

My only disappointment with the bread basket is that the $8.50 charge didn’t include any additional dipping sauces or accompaniments.  I would have liked something to go along with the bread, but we did make use of the mint yogurt sauce and the sweet sauce.

Moving on to the Main Event!