As with all good Skamarakas Family Trip Reports, this one starts with chaos and mayhem.  After deciding to make this weekend trip, I decided to go back to school.  That means that in addition to the kids each missing two days of school, I’m missing two days of school.  I scrambled to get the kids’ stuff ready to go, coordinate my nurses schedules, make sure my doctor was okay with the trip, got my assignments emailed to me, and picked up the homemade soup and pierogies Pop-Pop was sending to Brighid.

WHEW!  I can finally begin packing to get everyone there, clothed.

Except there’s a bad storm coming up the east coast.  And despite multiple conversations previously about whether it was better to fly or drive, now that flights have gone up by $50 per person, it appears we should have made the decision to fly.  So now that the trip will be even more than we budgeted for, we’re flying!

Okay, so how much do they charge per piece of luggage?

Now I have to pare down everything I planned on bringing.  When I have successfully put everything in two suitcases that I absolutely NEED to bring, it is nearly 11 o’clock at night, and we have to be up at 5 to head to the airport.  Did I even make dinner?  No worries – they’ll probably be eating the soup Pop-Pop made on the plane as it defrosts all over us.

The rain on the way to the airport is torrential, and I am so glad I don’t have to drive 1100 miles in this kind of weather.  I’m nervous enough about the drive to Philly!  We are soon on the shuttle headed to the terminal for our first restful break of the morning – time to grab breakfast, something to drink, go to the potty.

Uh, no.  Check in is nothing if not chaotic.  We somehow got put on two different reservations; I’m not sitting with the kids, who somehow got put in emergency rows, where they aren’t even allowed to be, and Jim, who is of course Jim, is assigned an upgrade to first class.  It’s just me and Bob Uecker in the last row of the plane.  Seriously.  The last row before the potty.

By the time we’re all straightened out, the girls and I are all sitting together; we still have the LAST row on the plane; and Jim is still in first class.  But now we have to race to the gate because they are going to be boarding in a few minutes.

Good thing we’re right next to the bathroom.  It’s so hard to make a potty stop when you’re speeding through the airport trying to make sure the flight to FL doesn’t leave without you! 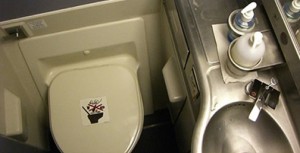 One Reply to “Wine and Dine Weekend – Episode 1”