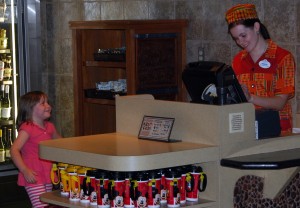 So, we’re in warm, sunny Orlando, and it’s time for lunch.  That can only mean one thing.  What’s that?  A Dole Whip?  I wish.  No, for us, it’s off to the Mara at Disney’s Animal Kingdom Lodge to see our oldest daughter at work!  She is in the Disney College Program, and quick service is her area of expertise.

So, I walk in with the other two girls, and Brighid is busy with customers.  You can see in the photo that she is cleverly disguised as, well, Brighid in her work costume, but for some reason, that little beanie on her head totally threw Granuaile off.  Word of advice to police agencies throughout the country – do not rely on this child as a witness in any criminal investigation.  Her powers of observation leave much to be desired.  I have to almost shove Granuaile under Brighid’s nose before she realizes, “Hey, that’s my SISTER!”, at which point, she ran over, disrupting the guest Brighid was helping.  Dear Brighid’s Boss, If Brighid’s cash register was off today, it’s totally my fault.  Signed, Brighid’s Mother.

Lunch at the Mara was mac and cheese for Granuaile, a burger for Eilis, and the African stew for Jim and I to share.  I love this stew, with it’s combination of flavors.  It’s a great autumn food, even if autumn is in Florida and it’s 88 degrees outside.

No meal at Animal Kingdom Lodge would be complete without a zebra dome.  Yeah, I’ve had gastric bypass.  Yep, done the diabetes thing.  But how can you resist?  I had one.  And a half. 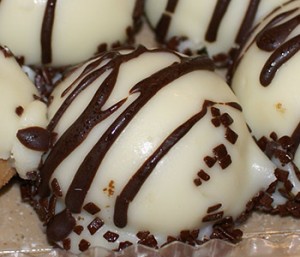 I’d love to stay and chat here at the Mara – or at least wait until Brighid is done work, but I have to go.  Eat.  Again.  I am meeting some of the Walt Disney World Moms Panel BFFs at Via Napoli, and I can’t wait for some Moms Panel hugs!