This is the photo taken of the 2009 Walt Disney World Moms Panel during our training weekend.  It was and always will be one of the most amazing times of my life.

I know there are many of you who are disappointed that you haven’t gotten the coveted round 2 e-mail today, and I wanted you to know that it doesn’t mean you don’t have the magic required.  There were so many people who helped me gain the knowledge I have of Walt Disney World, and many of them have applied year after year for the panel without success.  You are all equally as qualified as each one of us standing in that photo.  Sometimes, though, that pixie dust gets caught in a gust of wind and lands where it may.  Next year, I hope the wind is blowing ever so slightly in your direction!

For those of you who are celebrating – and nervous – CONGRATULATIONS!!  I know what it’s like to be in your shoes (although I have to tell you, when I got my round 2 notice, I was wearing knock off Ugg boots from Target – you probably have better taste in footwear!) .  You’re probably a bundle of nerves and a barrel of excitement – and it’s all good!

Best wishes as you move on in answering the next round of questions and recording that video message that will let the folks at Disney see the real you shining through!  If I can be of any help with words of encouragement, you certainly know where to find me. 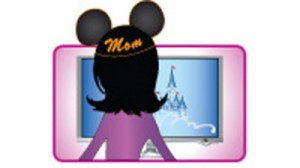 I have two daughters, and each daughter has two teachers (a teacher and an aide).  Each year, on a tight Christmas budget, I try to come up with something different but useful to give as a holiday gift for the teachers.

Since I have a 19 year old in addition to my 9 and 5 year olds, I know the drill when it comes to teacher gifts.  There are a lot of great gift ideas in the aisles of Target and WalMart that are inexpensive, lovely to look at, and things you think a teacher would use.  But in my mind, I think if I buy that awesome coffee set, the teacher will already have 9 other coffee mugs and she doesn’t drink coffee.  If I buy the bath set, she’ll have a house that only has a shower and skin allergies.  If I buy the candles, she’ll get 14 other candles that she’ll end up selling at a yard sale in the spring anyway.

I try to find something different.

This is going to be the first post among the Christmas gift ideas that will help you put together a nice, memorable gift – but memorable because it’s something a teacher can use!

This year, it’s Pasta Night baskets!  While browsing the aisles of my local Michael’s craft store, I found these items in their dollar clearance section.  The gift I’m making includes four pasta bowls, a bag of tri-color pasta, coasters, four placemats, and a set of paper napkin rings.  The items are going to be put into a colander that I found in the Dollar Store.  Viola!  Pasta Night gift basket for $12 per teacher!

Our Michael’s had a variety of four of five different patterns – we purchased the set above for the teacher, and the set below for the aides: 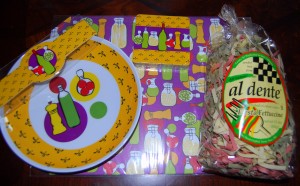 It provides a quick meal on a busy night during the holidays for the teacher, as well as a colorful gift for your child to give.  If you want to upsize, you can add some Italian seasonings, a garlic press, and a jar of good pasta sauce.  You can do the gift for under $10 if you eliminate the paper napkin rings, coasters, and the colander.

What a great holiday gift! 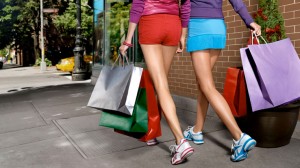 This is NOT beautygirlsmom – I know, you’re shocked

DANGER: Take small children by the hands, and remove all men with unrealistic expectations of woman, well I guess would be all straight men, but anyway, ladies, this is for us. 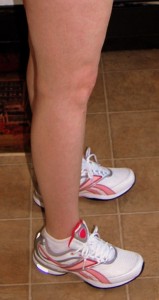 Seriously, did you think I’d show my butt here?  At least not unless I got the Photo Shop expert that makes the super models look as good as they do.

But anyway – we bought these fabulous sneakers that are not only going to improve my calves, thighs, and butt; but they are going to make my life fabulous.  I will be able to wear super short skirts and short shorts and never once worry that I have camel toe, shop only in stores that place my items in brightly colored shopping bags, and not have to worry about going to the tanning salon for my Snooki special spray tan – I will be naturally a beautiful shade of Not Ghostly White (the above photos have been retouched so you do not have to wear your sunglasses from my blinding white skin while you read my blog).

I’ve not had a lot of opportunity to wear the shoes yet, but so far, they don’t seem to be doing a whole lot.  The shoe sales woman claimed I’d have aches and pains in places I didn’t know existed on my body after my first wear.  My first wear was in Disney World – the Magic Kingdom – and the most I got was a small blister on my baby toe.

Maybe I’m wearing them wrong?  Maybe you have to already be walking to the stores with the fabulously colored shopping bags in order for these sneakers to work? 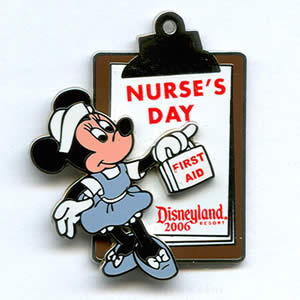 You know when you ponder things for a really long time, and then other stuff happens, life takes over, and the thing you’ve been debating over for forever gets pushed to the back burner?  And then you finally have time to sit down and make your decision, and the thing you wanted may not be as attainable as it would have been had you kept it in the front of your list of priorities?

There is a nursing shortage, but there is also a money shortage.  Nursing programs all over the United States are having to cut back on the number of people they are admitting for a variety of reasons – they don’t have hospitals that have enough stuff to supervise clinical hours for students.  They don’t have instructors to teach the classes.  Programs are being eliminated due to funding and other issues.  That means that in some schools, there is a two year waiting list to get into the nursing program.  Or there is no waiting list, but your application will be one of four or more for every open spot they have.  Getting a seat in some of these programs is going to be like hitting the lottery!

I am also finding that even though I’ve taken courses and gotten As in them, most of them are too old.  I’m having to repeat classes that I already took.

And I am finding that all those math and sciences classes I avoided taking in college because you didn’t need them to get a degree in English are all the classes that I need now – so on top of the nursing program I need to get into, I have to tackle at least two semesters worth of terrifying classes.

I am lucky that even though my DH has retired from work early due to a vision disability, we are able to send me back to school full-time. And I have a full-time free tutor at home with nothing else to do

But where do I go to school?

I ruled out any programs from non-accredited institutions.

Looking for a 4 year accredited school (college or university) for an BSN program that admits to the Nursing program, even if conditionally, is looking like a needle in the hay stack.

Am I missing something? Is every BSN program only taking transfer students, or students who get admitted to the College or University as -or general studies, and then roll the dice and hope you get accepted to those limited number of slots in 2 years?

Or are the $40k/year programs at Illinois Wesleyan University the only types of programs that do direct admission?