You guys are going to think I like South Park.  I don’t.  I hate it.  But my husband loves it.  Occasionally, he thinks the episodes are so funny, I’ll forget that I hate it and be rolling on the floor with him in fits of hysterical laughter.  While I thought the Jersey episode last week had some humor in it, this was not the case this week.  South Park made fun of another show I know – Hoarders – and there I was at midnight being forced to watch it in the style of Stanley Kubrick’s A Clockwork Orange by my husband. 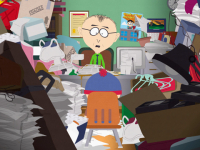 In the opening scene, Stan gets a note from his girlfriend and a visit by Dr. Chinstrap, a hoarding expert, there to help him clean out his locker.

That turns into a meeting with the school guidance counselor. Mr. Mackey is surrounded by stuff, and doesn’t know what hoarding is. “Hoarding, never heard of it m’kay”

In a dream regression Mr. Mackay goes to his childhood. Apparently he and I have a lot in common, m’kay?  We both had LiteBrite and we both enjoyed watching Zoom – the original.  Do you remember how to get in touch with them?  Before email?  Because I can sing it in my sleep – and evidently, so can Mr. Mackey.  Write Zoom zee double o emm Box 350, Boston, Mass 02134 – send it to Zoom.

The final insults come from Freddy Kruger and Woodsy the Owl.  I’m lucky after watching this South Park episode that I don’t have nightmares that need exorcising.  I’ll never be able to look back fondly on my memories of Woodsy the Owl again.  Poor Mr. Mackey. 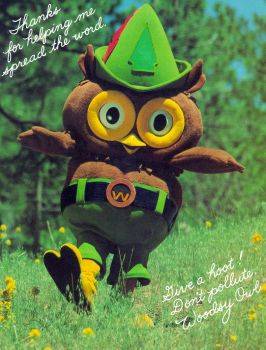 In case you missed it, you can catch the full episode http://www.southparkstudios.com/full-episodes/s14e10-insheeption#w=10.20.2010&before

Does anyone watch South Park?  I mean, those of you with two or more brain cells to rub together?

One Reply to “Hoarding, what’s that?”