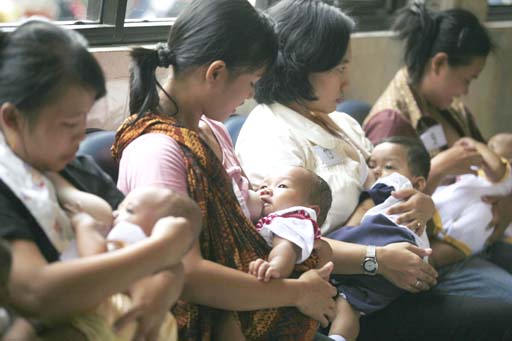 I know this post may take on a decidedly anti-breastfeeding tone, and I am trying very hard to make it so that it doesn’t.

But threatening to send women to prison for not breastfeeding?  Are you serious?

I whole heartedly concur with those people who say breast is best.  I have no trouble conceding the fact that breast milk is exactly what babies need in terms of vitamins, nutrition, and nurturing.

But what if this is something you can’t do?

When Brighid was born, at 31 weeks, she wasn’t able to nurse.  They fed her through an NG tube so that she didn’t burn calories working to get something to eat – and at 2 pounds, 10 ounces, calories were crucial.  They pumped her full of a special, high caloric, super fat formula, designed to help put some meat on her tiny bones and help her body regulate it’s temperature better.  I tried to pump, but in many frustrating hours of effort, the best I did was an ounce.

Then there was Eilis.  With a terrible case of jaundice, it was all we could do to keep that kid awake for anything – even feeding.  She had a good latch right from the start, but would only stay latched a few seconds before drifting off to sleep.  They encouraged me to pump, and I did it like a champ.  She was exclusively fed breast milk for 6 months, and it was damn hard work I was proud to do.  But then I just didn’t have anything left.  I was exhausted, I was having to pump more often to have enough milk to sustain her growth, and I had no time for sleep.  I had gone from waking up every hour and a half when she was in her first few weeks of life to having to get up every hour, pump for 20 minutes, and pray I had enough milk to get through the next day!  Thank goodness she took to food so well, and the transition to formula was so smooth.  I’d be dead and buried from sleep deprivation!

And poor Granuaile was born at a time when my dad was seriously ill.  I spent as much time running back and forth to see him as I did at home with my brand new baby, and by the time my dad passed away when Granuaile was six weeks old, I had already failed.  Emotionally drained and physically exhausted, my body rebelled against putting energy into much – including feeding a child.

And what if I lived in Indonesia, where after my three months of paid maternity leave, I have to go back to work?  My family depends on my income, and with it we are still living at or below poverty level.  Should I be concerned that if I can’t maintain my milk supply because I am trying to take care of a family that I will end up in prison?

There is not a huge amount of support in the workplace in Indonesia for these women to take breaks and pump.  And while the new law includes a requirement mandating employer compliance, giving a woman a chair in a room with an electrical outlet doesn’t mean they’ll be bending over backwards to accommodate a nursing mother.

The law puts tremendous pressure on women who are probably already torn between the needs of their baby and the needs of their family.  Now that it comes down to pitting the law against them if they make the choice that serves the better interest of their whole families, the stress is immeasurable.

Does this smack in the face of women being allowed to do what they want with their own bodies?