We have been to CiCi’s Pizza Buffet in Florida and in the Carolinas over the past few years. Our kids love it, and I think Eilis would rather eat there than just about anywhere.  We pretty much know what to expect when we go, and the only absolutely horrible time we’ve ever had was with my stepmom, who realized on our way to get CiCi’s that she did not have her passport or travel documents to board a cruise ship the next morning.  I don’t think we ate a thing that night.

As we were driving home, Jim saw a sign at the recently opened CiCi’s Pizza in Cherry Hill that said “3 for $9.99”.  Ever the bargain shopper, he told me to pull in.

And this is where the scales of good and bad started swinging violently in both directions.

Unfortunately, on the minus side, the convenient location made for a crowded Saturday evening.

It’s okay, though, because on the plus side, Granuaile has fallen asleep, and the 3 for $9.99 is a carry out deal.  You can’t beat that in this economy!

Oh, but wait, on the minus side, when you try to order the carry out deal, they tell you it’s no longer available.

On the plus side, the staff here is damn friendly, and you almost don’t mind being told you’re not getting your pizza deal.

On the minus side, when Jim asked how much the Mexican Ole specialty pizza was, the friendly girl didn’t know. She told him to look on their sign.  Their sign is missing prices.

That’s okay, though, because on the plus side, two large pizzas rang up for less than $13, so it’s still a good price.  And the friendly girl at the cash register offered him a complimentary soft drink while he waited for the pizza to cook.

Blech.  On the minus side, the sweet tea he got from the beverage bar was weak, unsweetened, and tasted like dirty water.  You can’t really complain when you get something for free 🙁

Fortunately, on the plus side, another customer walked up and let them know that their sweet tea was a puddle of nastiness, thereby saving other unsuspecting sweet tea drinkers the fate of pond scum sweet tea.

The handsome manager in the yellow shirt, on the plus side, said he would have someone take care of it right away.  He is another friendly staff member! 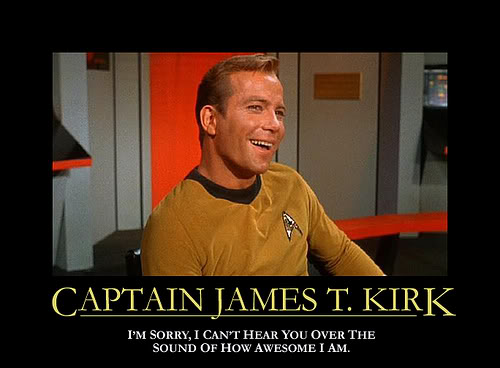 If you’re considering eating in, the pizzas were replenished quickly with hot stock, and the restaurant was quite clean, especially considering how busy they were.

Unfortunately, Mr. Yellow Shirt has to inform Jim that somehow, in their rush to get our pizza ready, they accidentally flipped it upside down in the oven.  It’s ruined.  They have to start over.

But, if you’re still keeping score, on the plus side, he offers us a dessert on the house, which turns out to be a pizza box FULL of CiCi’s cinnamon rolls, which really are the only reason some people even go to CiCi’s. 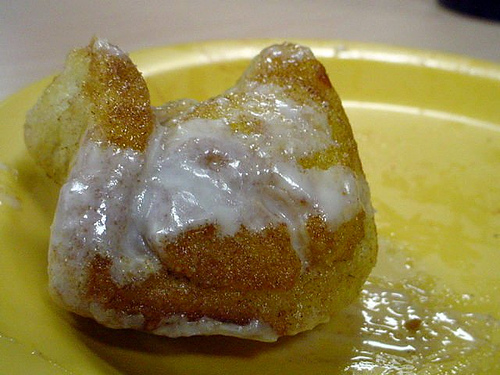 Now, if you’ve hung in through the good and the bad, let me reveal the ugly. 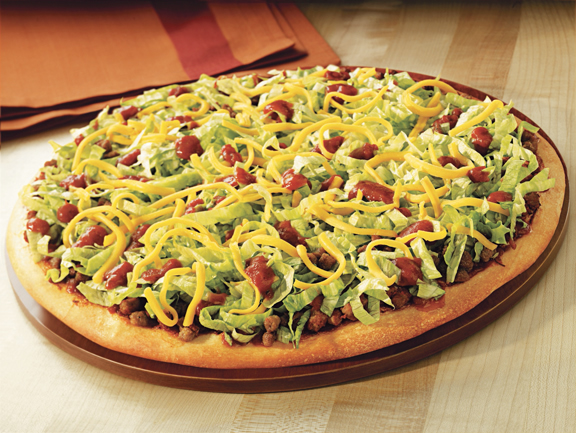 I know – it doesn’t look ugly from here.  It’s not a pizza I would have normally ordered anyway, but Jim likes to try new things – it adds spice to his life.  But the picture doesn’t look half bad.

Ummm, ewwww.  There’s my review of the Mexican Style Ole Pizza.  It was a wet bottomed, soggy mess of a pizza with nasty old bagged salad thrown on top (you know, the kind you buy with the carrots and red cabbage?  That’s what was on top of the pizza – since when is red cabbage Mexican??).  Blech would be a compliment to this pizza.  It was inedible, so we let Jim eat it.

Gastric bypass folks – you know the drill with pizza.  Sometimes the crust is too doughy, but CiCi’s is a thin crust, and it never gives  me any trouble.  Go for pizza selections at the buffet that have more lean proteins – they do have some topped with chicken as opposed to pepperoni and sausage, and that will save you some fat and calories.  This isn’t the worst pizza, and it’s one of the few pizzas I can consistently eat without agonizing later.

In Summary, CiCi’s is fun, a good value and okay food. Don’t expect to be in Italy eatting Pizza Margherita next to the Vatican. I’ve done that, and its unrealistic to expect the same experience at a value buffet chain in America. You go for the value to CiCi’s.

Its the holiday season and you are thinking of racing off to Walt Disney World to get the second most wonderful picture of a baby with Satna Claus ever.

Of course the first is this one – 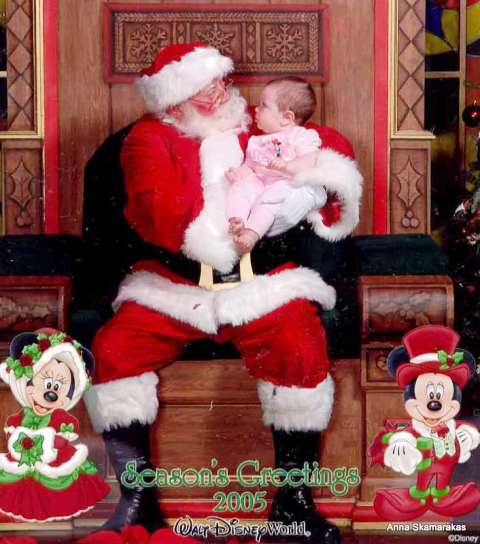 In my husband’s humble opinion that is.

But now back to the topic – can you take a baby to Walt Disney World at Christmas?

Yep, it’s crowded.  Christmas is the busiest time of year at Walt Disney World.  But guess what?  It’s crowded everywhere at Christmas time!  Have you been to the grocery store?  The mall?  Target?  Packed – all of them.  Unless you have a medically fragile child who should not be exposed to more than a few people, don’t let the crowds stop you! 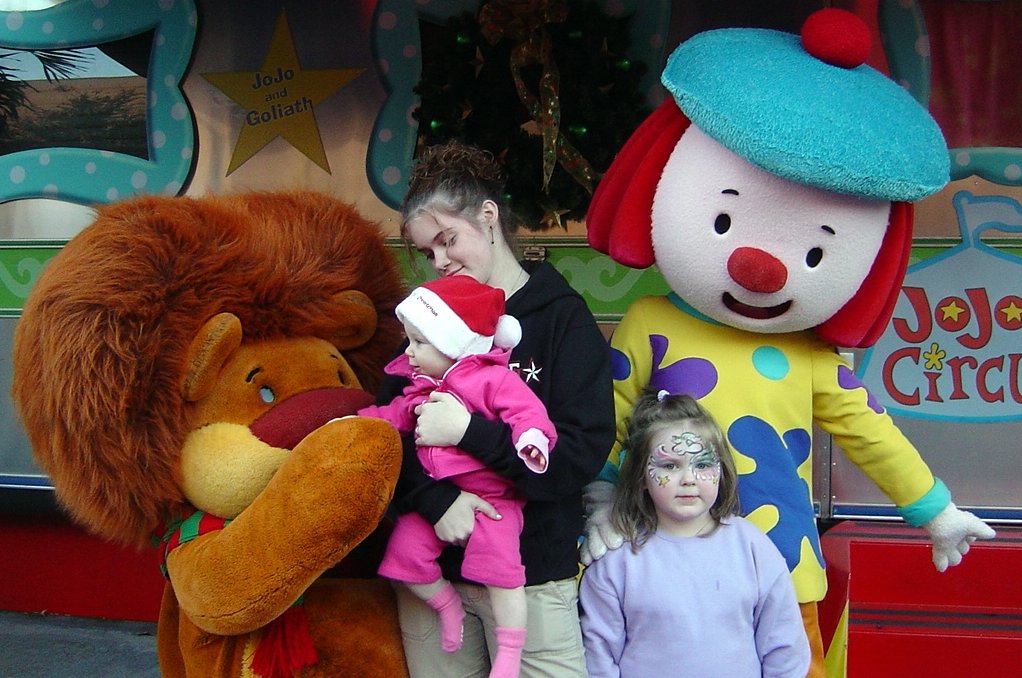 Believe it or not, weather can be a concern in Orlando during the holidays.  December is a very unpredictable month.  One day, you may have temperatures soar into the 80s.  The next day, you may be lucky to get out of the 60s.  And there are even some days in Orlando in December where reaching 50 was a struggle!  Average temperatures are in the low 70s, but if you prepare for cool mornings and cold nights, the baby should be fine.  I always plan for a nice fall day when I visit Orlando in December – wear layers, so when the midday sun warms you up, you can wrap your sweater or sweatshirt around your waist.  For a baby, bring a lighter weight blanket and a heavier one.

Dining reservations can be made up to 180 days in advance, and many people planning to be at Walt Disney World for the holidays are on the phone or online as soon as that window opens.  But a baby doesn’t care where they eat!  There is a really good variety of counter service meals available at Walt Disney World – from the theme parks to the hotel food courts.  You will find something to eat.  You may not get a window table at the California Grill during the Magic Kingdom fireworks, but you may even luck into a last minute sit down meal.  Browse the online tool at www.disneyworld.com to see what may be left for your last minute trip.  If you can’t find anything, fear not.  I’ve made more than a few holiday meals out of a turkey leg!

Now that I’ve gotten rid of all the big excuses, why not?  I’ve got way more happy memories of my babies at Walt Disney World than stressful ones.  And as if Walt Disney World isn’t magical enough the entire rest of the year, the holidays at Disney will simply take your breath away!  Everything from the decorations and the gingerbread to the Candlelight Processional and the carolers will instill the holiday spirit in your heart and cement it there throughout the season.

Would I take my baby to Walt Disney World for Christmas?  A thousand times, yes. 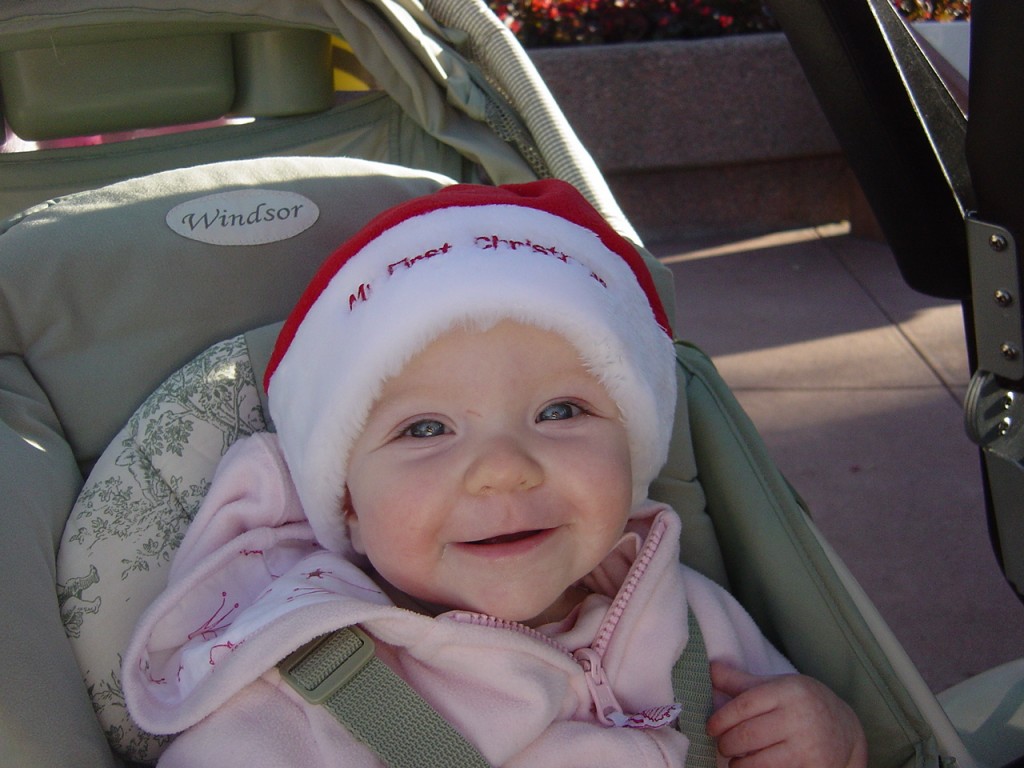