Let’s move on to the main event, shall we? 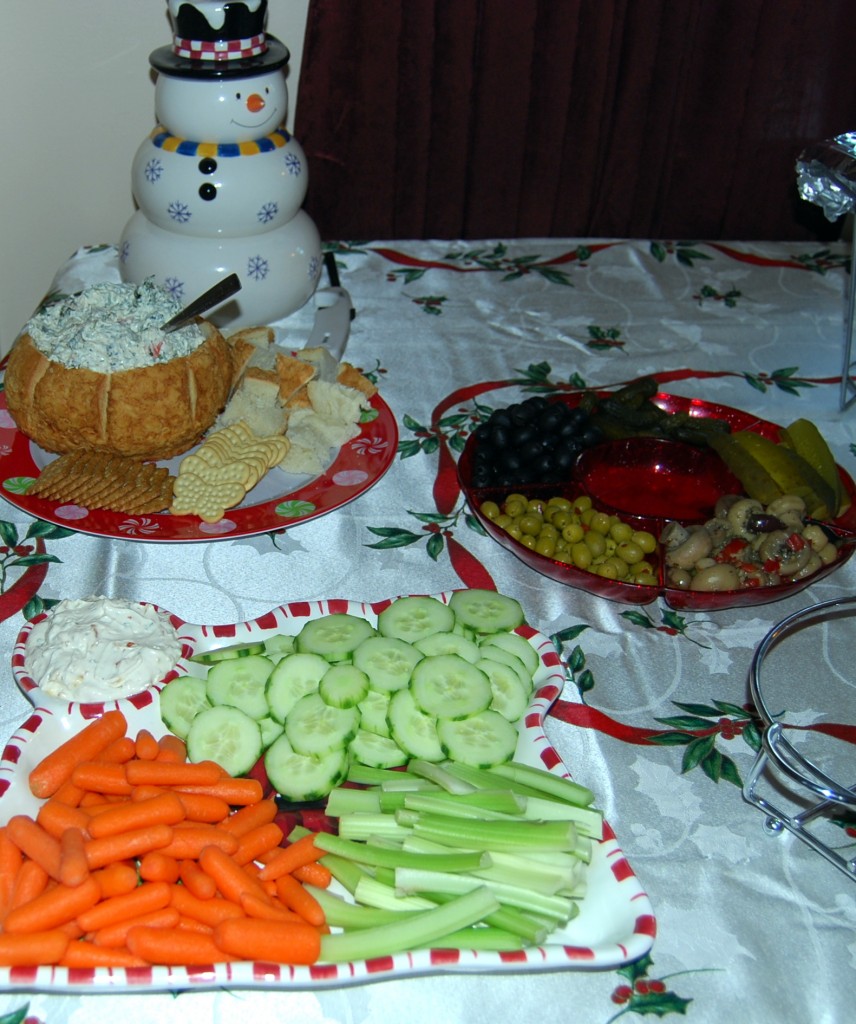 This is where things get fuzzy.  This table WAS just for the main parts of the meal – entrees and side dishes.  As my dining room table has grown in size over the years (hmmmm, so has my waist size – coincidence?), it seems I add more stuff to this table that maybe should be elsewhere?

Anyway, what ended up on this table was the spinach dip – which was gone entirely.  The vegetable crudite, made only with veggies I and my girls will/can eat, so when I have leftovers, it’s not leftovers of stuff I end up throwing away.  We went through nearly the whole tray.  Then we had a pickle (dill spears and sweet gherkins) and olive (black and green) tray – with marinated mushrooms, mostly because I had an extra space in my dish.  I had nearly the whole tray left.  Apparently, this was not an olive year. 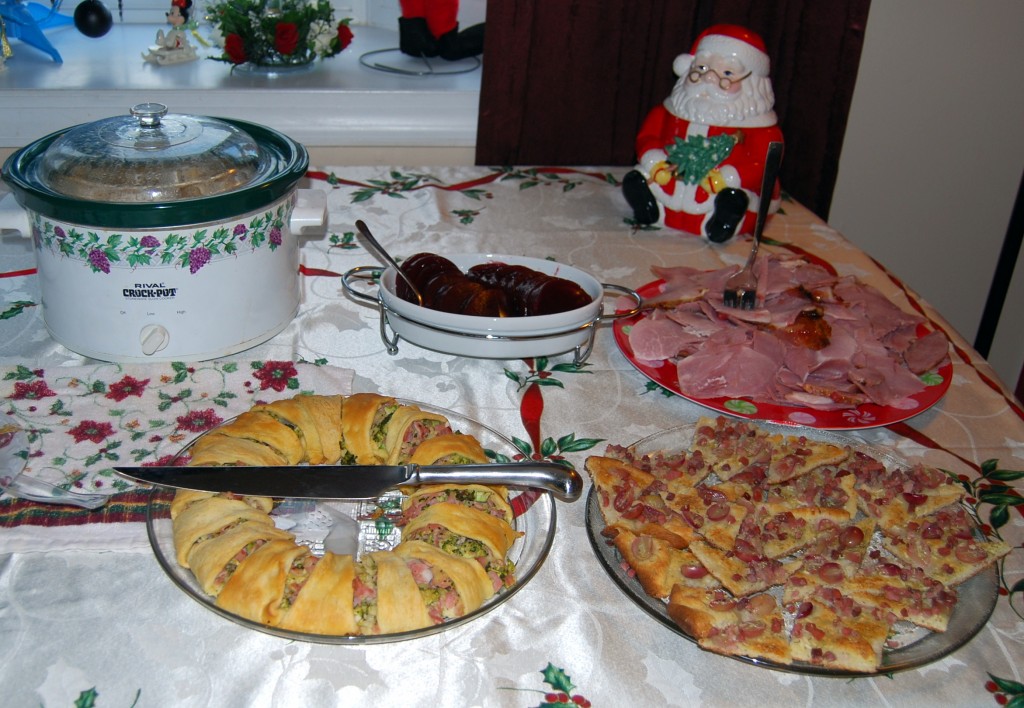 We had at the other end of the table my baked ham, served cold.  I had a bunch of that left, but ham doesn’t do well in the chafing dish for the length of time the party was.  I might have to work on that.  In the front right is the grape pizza – which was almost entirely gone.  In the crock pot was my roast turkey, which was a big hit – and that was a surprise.  Aren’t people still eating turkey soup, turkey sandwiches, and turkey croquettes from Thanksgiving?  I put the cranberry sauce next to it in case people wanted to make a whole Thanksgiving meal/sandwich kind of thing.  I had half of the cranberry sauce left.  Next year – awesomesauce (this is an homage to my “brother” on the Moms Panel, Jonas, and I have no idea what one would even make awesomesauce out of – perhaps Damn Good Dip?).

The gorgeous looking “wreath” is a broccoli/ham/cheese ring, made with a recipe from my friend Amy.  Amy has elevated herself to Best Friend For Life with this recipe!  Almost as soon as I put the ring on the table, it was entirely gone.  I’m sorry I didn’t make the whole table just these rings – it got RAVE reviews.  No awesomesauce or damn good name necessary. 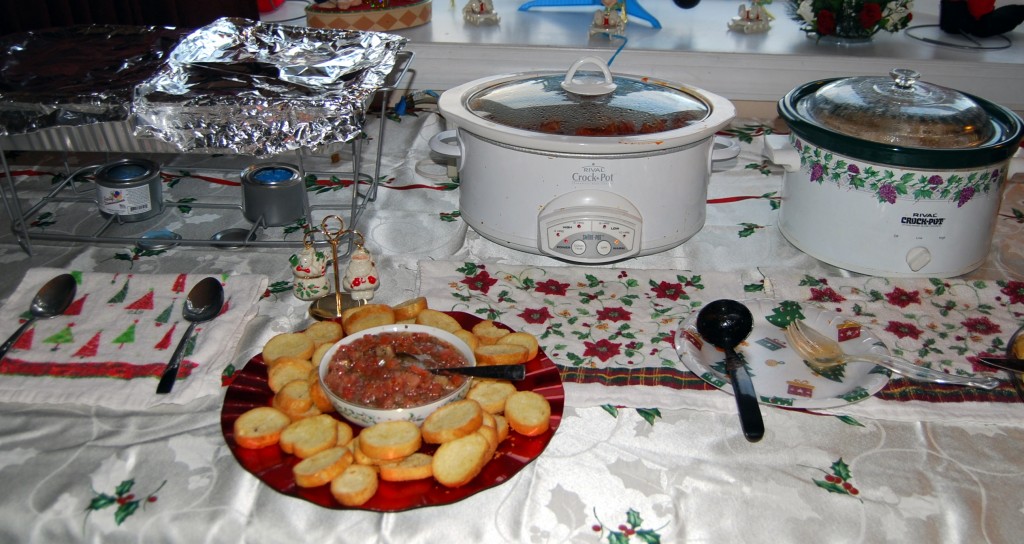 Meatballs, Sausage, Bruschetta – oh my!  The bruschetta is nestled safely back in my fridge, as it was the lone “not touched” item on the table.  The second crock pot has meatballs and sausage in it, and I had only a container left.  Even the Italians commented on how good they were (thank you, Ragu, which may very well be the original awesomesauce).  The chafing dishes contained stuffing – my stepmom’s recipe- which also won critical acclaim; and kielbasa.  One pan of kielbasa was entirely eaten, but the second pan was too dry and untouched.  I also think we got better kielbasa at the Polish deli, but to save time, I bought it at Wegman’s deli.  Next year, we’re back at the Polish deli (yeah, I keep saying next year after I swore never again).

Then we had desserts.  I inevitably forget SOMETHING on the table.  This year, it was the dip for the fruit salad.  I had a mini-meltdown over desserts.  I ordered a case of cranberry bliss bars from Starbucks, along with peppermint brownies, and my bliss bars were accidentally dispensed to Starbucks patrons with obviously discriminating palates.  I was pissed.  Almost pissed enough to never set foot in Starbucks again.  I ended up replacing it with a red velvet roll (no one touched it, as pretty as I thought it was), cupcakes, panettone, petit fours, and blueberry cake (they were hard to replace).  I had desserts of all kinds left, especially since people brought more desserts in.  I don’t have a photo of the beautiful carrot cake my Aunt Barbara made, but I heard it was delicious! 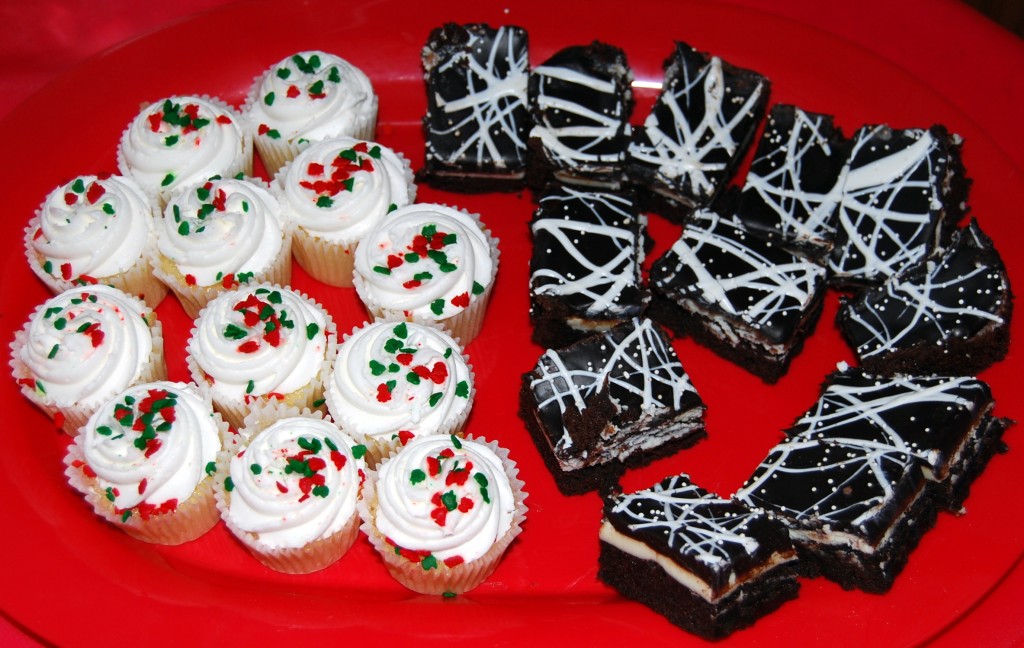 What kind of desserts do people like at these things?  Clue me in.