I am a creature of habit.  I generally wake up the same time every day – even on weekends and holidays.  I get the same drink at the same Starbucks every morning.  I like to visit the same theme park every time I go on vacation.

So when I tell you I have enjoyed for most of my life Channel 6 Action News in Philadelphia, you can pretty much guarantee the accuracy in that statement.  I’ve been with them longer than Jim Gardner has been with them.  I cried real tears when Jim O’Brien died in that terrible accident.  I watched Lisa Thomas-Laury and Marc Howard from the beginning of the 5 o’clock news format.  These have always been my go to people. 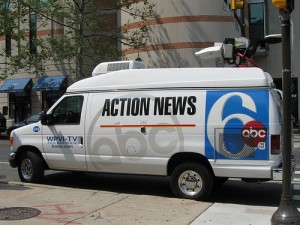 So what’s up with my morning newscast?  Channel 6 in Philadelphia seems to be going through a bit of a morning news show crisis, in my opinion.  Some mornings, I wake up to the funny and talented Matt O’Donnell, along with co-anchor Tamala Edwards.  I have to admit, it took a bit of time for me to warm up to Tam – she swallows quite often during her newscast, and being a bit of a saliva-o-phobe, that kind of grosses me out.  But I love Matt, David Murphy, and Karen Rogers (who is as big a Disney fan as I am!).

You know, I can’t just decide every Friday to wake up next to George Clooney – it’s always Jim.  So why, it seems like nearly every Friday for the last long time, do I not get to wake up to my morning news team?  It seems like every other day I’m hearing, “Matt’s off today” or “In for Tamala Edwards…”  It’s not that I mind seeing Brian Taft or Sarah Bloomquist (gosh, I love her!), it’s just that if I’m going to wake up every morning in the same bed, in the same bedroom, in the same house, I want the same consistent courtesy out of my morning news team.

And it’s not just the weekday newscasts they’re messing with.  Some Saturdays, I get Walter Perez.  Walter and I go way back, as he was also on the local station when I lived in South Florida, and I like seeing his familiar face on the weekend.  I like seeing Nydia Han on the weekends.  But I don’t like a revolving door of news anchors.

I think for someone to build trust in their local news broadcast, they need the same familiar cast of characters.  For years, this city tuned in to see Jim Gardner, Dave Roberts, and Gary Papa.  I get that people grow old, retire, succumb to illnesses, move on to other opportunities.  But Action News seems lately to be having an identity crisis.

Let’s get this news broadcast into some decent therapy.

2 Replies to “Can A Girl Get A Little Morning Consistency With Her Coffee?”