It should come as no surprise that I side with Maria on this one – but there is a bit of a limit to my support. 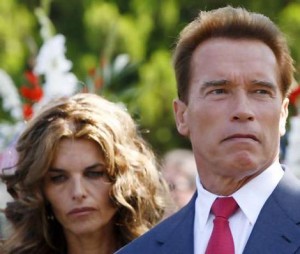 Going into the marriage, Schwarzenegger already had one strike in my book.  As a Hollywood celebrity – and an action star at that – there’s already some question in my mind about how big his ego is, which leads me to wonder how entitled he might have felt to whatever women he wanted.  I’m sure he had dozens of women throwing themselves at him, and that would be a terrific temptation to your average Joe, but probably a bit like a buffet to someone like Arnold.

Marrying Maria Shriver actually put a second strike against him in my book.  I have a deep distrust for politicians, and marrying into the political Kennedy-Shriver family was definitely Schwarzenegger’s leg up in the political arena.  In order to be a good politician, you almost have to have a superiority complex, and that, in addition to his Hollywood celebrity status, probably provided Arnold with not only the will and desire to cheat on his wife, but also the assumption that he’d never be caught.

So, to that extent, Maria probably should have seen SOMETHING.  I mean, the woman was in her house on a daily basis; they paid the woman in excess of $60,000 a year to “work” for them; and as if it weren’t enough, to add insult to injury, both Maria and the other woman were carrying children at the same time – giving birth literally within a week of each other.

I know the rich and famous have a whole other kind of lifestyle than the one I live, where I have to constantly remind myself of my bank balance before I go shopping, but for 13 years, how do you hide the fact that you are supporting another child somewhere?  Did she think he signed himself up with that Sally Struthers feed a child in Ethiopia program?

He’s scum – obviously.  But I can’t help but wonder if she turned a blind eye to some things just to save face.  She has, after all, grown up among Kennedy men – not the most reliable when it comes to that pesky little fidelity thing most of us married folks have going.  Would that give her a heightened sense of awareness to cheating or a tolerance for it, as long as it wasn’t a public humiliation to her or her children?

Whatever side you’re on, you can’t deny that he screwed up big time.  The sad thing is, as soon as her bags were packed and she was out the door, I’m confident there were any number of gold digging bimbos who would have been all too happy to jump in and take her place.  He’ll feel no real remorse and have no real sense of suffering until he realizes what he’s done to his children.

That’s who really gets hit with the brunt of this.  And I’m really quite sad for them 🙁