So, as you’re well aware, especially if you live somewhere that the six o’clock doomsday hour has already passed, God saw fit to spare us miserable mortals for the time being, allowing us yet another day to mess things up.  Well, damn.  I had an awesome outfit chosen for the looting party I’ve been invited to on Facebook for the day after, when those of us not among the chosen were going to get us a five finger discount on some HD TV. 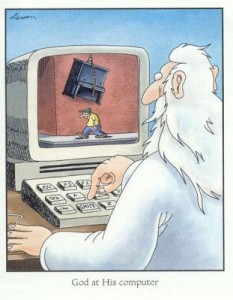 But, let’s just say today HAD been the day.  And on your way up to Heaven, God said, “Choose one thing from your life on earth – not something living, because frankly, I don’t do diapers, I don’t walk dogs, and I don’t want to have to set yet another place at the dinner table – and bring it with you.  It’ll be nice to have that memory of home, and it will reduce the chances you’ll moan and complain about your accommodations or the food if you have something to keep you company.”

What are you bringing?

I’ve thought long and hard about all of my worldly possessions.  I have photographs that I cherish, jewelry that I love, books that I would never want to be without.  It’s been really tough to decide on just one thing, but after much thought, I’ve chosen my item. 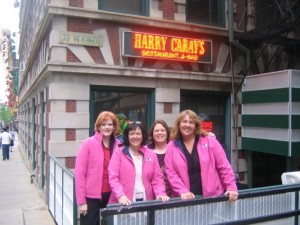 I know – I hate pink, for the most part, so why would I want to spend eternity with only a pink jacket?

Disney World is where I have some of the most wonderful memories of my family.  Brighid as chef of the day at the Crystal Palace when she was four; Eilis learning to walk at EPCOT when she was a year old; Granuaile at 8 months old looking directly into the eyes of the Santa at Downtown Disney; and my honeymoon with the one and only true love of my life.  The jacket will remind me of the holidays we spent at Disney World, the occasions we celebrated, the meals we all ate together, laughing and joking – not worrying about cheerleading practice or dance classes or a scout meeting.

The jacket will also remind me that I was a competent and qualified enough writer that I was able to write answers that helped at least a few people plan a vacation that would give them some of the same wonderful feelings I get when I think of my cherished family Disney memories.  I can say that being on the Moms Panel was a true highlight of my 46 years on earth (okay, the end of the world is surely coming now – I’ve put my age out there in print!).

And the jacket is a symbol of the friendships I’ve made.  The weekend that I got that jacket, I met the 15 people who will be friends for life.  They are the people with whom I bonded more quickly than I have ever bonded with anyone else (except Jim).  When I look at the jacket, I will think of when we met; our weekend in Chicago; my visit with Joanne in NYC; Margaret’s birthday weekend at WDW.  And I will cherish every Facebook conversation, text message, and Tweet that we’ve shared.  Not to mention the bonus friends I’ve made as a result of being on the Moms Panel – Moms Panel Erin, Jud, Anthony, the other Moms Panel members, and those Skurvy Monkeys.

So, while I rarely ever wear the jacket; pink is not my color; and I would hope that I could find the darn thing in an instant if God said I could take it with me, the one thing I would want to depart from this mortal soil with is my jacket.  And all the memories that come with it.