And sometimes, it’s not.

I’m  studying hard for this semester’s A&P II class – in case you haven’t followed my blog or my Tweets to know how messed up this is making me.  One of the things that I’m finding is that I focus way too much on the small stuff – and that’s not really all there is.  If the professor gives us a test, he doesn’t necessarily want to know a cell’s mother’s maiden name, or what the cell’s friends called her when she was a bitty, baby cell.  Sometimes, he wants an answer like “the foot”.

But I sometimes have a hard time seeing the forest for the trees. 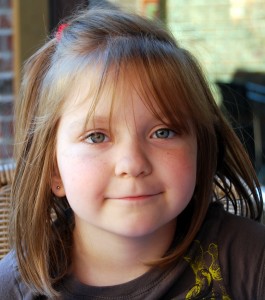 I went to pick Granuaile up today so she could look at her new haircut in the mirror (the above photo is not of the new haircut, because her mother is a slacker who couldn’t be bothered to whip the camera out).  She squirmed and struggled and begged me not to pick her up.  At one point, she did that jelly body thing – you know, where they just dissolve in a pool of jelly, so that you can’t get a good grip on them?

I get online.  I research fear of heights.  What causes it?  At what age does it manifest itself?  What trauma could have occurred without my knowledge or without me realizing it was trauma?

And after a good long time researching, I went to Granuaile.  The conversation went something like this.

Me: Granuaile, stand up on the sofa.

Granuaile: She doesn’t say anything, she just stands up on the sofa.

Me: I don’t say anything, I just pick her up.

Granuaile: She still doesn’t say anything, but wraps her arms around me and lets me carry her to see her hair in the bathroom mirror.

Me: Granuaile, how come you didn’t let me pick you up earlier?

Granuaile: Because if you dropped me, I’d get hurt.

Me: But I didn’t drop you this time.

Granuaile: No, you didn’t.  But before, I thought you might.

Oh.  So there was no major trauma.  There was no horrifying memory she has from infancy that torments the child.  She didn’t witness someone fall to their death from a height of – how tall am I? – 5’8″, and it scarred her for life.

I only looked irresponsible for that minute.