To watch or not to watch?  I struggled with this one.  When ABC cancelled “my” soap – All My Children – I thought I’d never watch anything they replaced it with.  Ironic, really, since my schedule had made watching anything in that time slot impossible a long time ago.  But still – nostalgic loyalty made me want to not like The Chew, so I wasn’t going to watch. 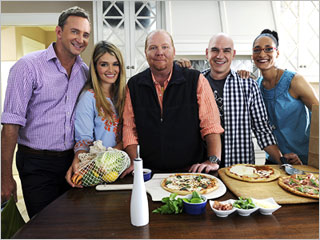 As irony would have it, however, I had nothing at all to do today at 1 PM except sit waiting to get an x-ray done in an office that had The Chew on the television.  So I watched.

Blech.  If this had been real food put in my mouth to chew, I would have spit it out.  It’s just not good.

First of all, the show bills Mario Batali as one of the hosts of the show.  Mario couldn’t even be bothered to show up for the premiere episode – that might be an indication of how seriously Mario is taking this show.  If I was going to tune in, I’d would have wanted to see Mario.  Good thing I’m not tuning in.

I love Michael Symon and I adore Carla Hall, but I think they competed too much with each other for the down home, good old boy/girl spot on the panel.  They both oozed homespun goodness.  And the spot Michael Symon did – a five minute meal?  C’mon Michael – let’s be honest.  Pretty much everything was ready to go – peeling, chopping, slicing and dicing – all done.  Hell, I can cook a meal in 5 minutes when Swanson’s does all the prep work for me!

The rest of the show – meh (and I don’t mean meh as in Mehmet Oz – who, by the way, is the father to Daphne Oz on The Chew!).  It seemed a little forced, maybe a bit rushed.  I don’t think I’d tune in again – not even if Mario can drag himself off of the golf course to show up.  If I find myself with an hour to kill around this time of the day, I’ll probably grab a sandwich and watch The View.

One Reply to “The Chew Doesn’t Taste Very Good”