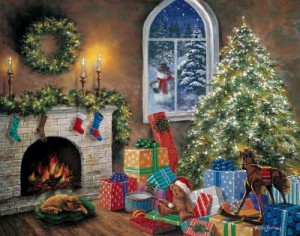 ‘Twas the night before Christmas, when all through the house

Every creature was stirring, even those two damn dogs who were told to lay down and be quiet at 9 PM.

The stockings weren’t hung, because, as usual, I over estimated just how much one stocking can hold, and they will pull my banister down if I leave them attached with all that crap in them.

The children were whining and complaining from bed

That the new Christmas jammies were itching their heads (but it’s okay, because I told Granuaile she had to put the footie part on her FEET, and now her head’s not itchy any more).

Daddy in his boxers (the ones that say “I Got Yer Christmas Present Right Here” on them) and I in my – oh, wait, I’m still up and dressed.  Because it’s Christmas freakin’ Eve and everyone else gets the night off.  But I’m the mom, and there are presents to wrap, mostly because they didn’t fit in the damn stockings; dishes to do; a camera battery to charge; presents to put under the tree; and hopefully, when it’s all said and done, a cocktail to be had!

So yeah, Daddy had just settled down for his long winter’s nap.  I worked my ass off.

When out on the lawn there arose such a clatter!  I ran to the window to see what was the matter!

As expected, it was our cracker Christmas display falling over, yet again.  Santa kneeling at the Baby Jesus is asking for one of those LifeLine “I’ve Fallen and I Can’t Get Up” buttons so he doesn’t have to rely on us to stand him back up every damn day; and the inflatable sled full of snowman is now pointing vertically, with the one snowman clutching his chest and yelling, “I’m comin’ to see you, Elizabeth!” as he looks upward toward the heavens.

(the original poem has a line here that references the new fallen snow, however, this is Jersey, and it only snows when I have somewhere important to go – I’m leaving that line out)

I’m speaking not a word, and I’m going back to my work.  There are presents to wrap and photos to fake (I try to photoshop a picture of a reindeer in front of our house for Granuaile each year – that kid will think there’s a Santa until she’s 30, so help me Bob!)

But for you faithful readers, I exclaim, with great thanks in my heart

Merry Christmas to you all! (Harper, did you just fart??? Holy Jeebus!)