So, you know when you’re on a diet, you start missing food.  You may not have even eaten all that much of it when you weren’t dieting, but as soon as you feel like you can’t have something, it becomes The. Most. Important. Food. EVER.

Chips are kind of that food for me.  I could go from birthday party to birthday party and rarely think about eating a potato chip or a Dorito.  But put my fat arse on a diet and tell me things like chips are a forbidden food, and I won’t rest until I have some.  So there.

But today, I’m here to tell you that my chip crisis has been solved!  Thanks to my fabulous friend Faith, I have discovered the joys of Kale Chips!  Yes, that’s right, kale.  As in the green, curly, leafy stuff that you move off to the side of your plate and act like you don’t see it there.  Someone once described the taste of kale to me as a cross between a brussels sprout and asparagus.  I once described kale to them as something I’m not eating, even in the event of an apocalypse, where the only thing that survives on this earth is me and kale.  So how can calling something this nasty “chip” make it so appealing?

Before attempting, I grilled Faith on the important stuff – taste, texture, and kid rating.  It all sounded positive, so I picked up an enormous bunch of kale at the grocery store and figured I’d give it a try.  If nothing else, it was $2 towards my free Easter ham from the local ShopRite.  And honestly, if they’re terrible, it’s not my fault – kale is supposed to be terrible.

These were oh my gosh so easy to make.  You wash and thoroughly dry your kale leaves, and separate them from the thick vein that runs through the middle. 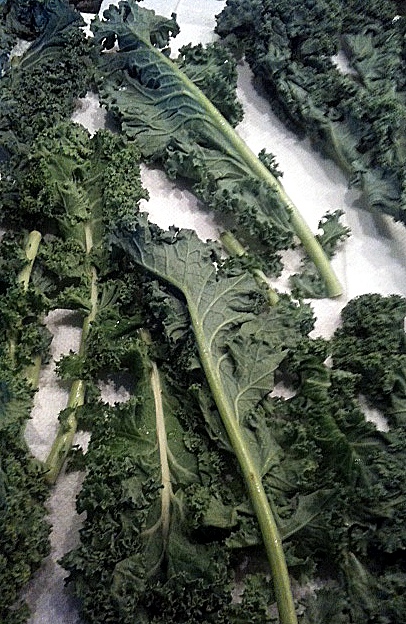 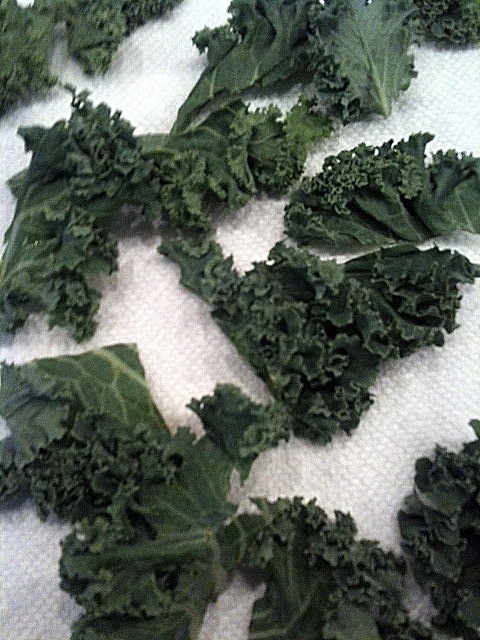 My $2 bunch looked like quite a bit of kale, especially when ripped into pieces.  Don’t worry.  The mound of kale will soon be reduced dramatically.

Once your kale is clean, cut, and ripped, you drizzle olive oil and some seasoning on it.  I used just sea salt on most of it, but on a small batch, I used Garlic Bread Sprinkle from McCormick.  It contains a little garlic powder and a tiny bit of parmesan cheese, and is great to make garlic bread or to sprinkle on popcorn or vegetables.

I tossed the kale in a big bowl in the olive oil and seasonings, although you could probably just as easily use a cooking spray.  When I was sure I’d gotten some of the seasoning on each piece, I put them on a flat cookie sheet lined with parchment paper.

In the oven at 350 degrees, my chips were ready in just about 12 minutes.  They should be crispy but not burnt (the crispier they get, the more delicate they are, and the curly parts get crumbly).  They are delicate and crispy, and I’m not sure which I loved more – the salted ones or the garlicked ones.  Both are absolutely delicious.

Now, you can certainly make these less healthy by adding too much oil or the parmesan cheese (which really was just a tiny amount in what I used), but kale on it’s own has only about 25 calories in a cup.  Even if you add olive oil and salt, you still have a snack that’s less than 3 grams of fat and under 60 calories.  Compared to the over 150 calories and nearly 11 grams of fat in an ounce of potato chips, and you’ve got a healthy, kid friendly snack that you won’t have to sneak around to eat once you tell people you’re dieting!

Thanks, Faith, for the great idea! 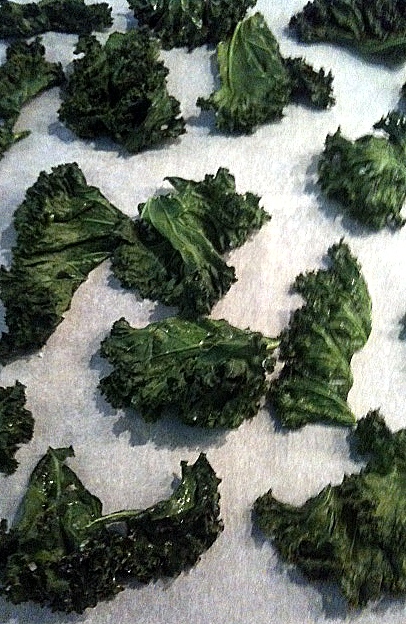