I am in school four days a week, and two of those days, I don’t get in the door until around 5 o’clock – if traffic is good.  By then, I’m exhausted, the kids are starving, and we’re keeping Jim out of the kitchen by order of the local fire department.  Nothing is on the table for dinner.

I’m always on the lookout for things that will help get a semi-homemade meal on the table in record time.  If I can feed my hungry crew in less than 30 minutes without calling Domino’s, I’m a happy mom.

On a recent trip to the local ShopRite, while browsing taco essentials, I found the Mission Chicken Caesar Wrap Kit.  The kit comes with 12 flour tortillas, Caesar dressing, and Caesar seasoning.  According to the box, I just needed to add 1.5 pounds of boneless, skinless chicken, and dinner would be served. 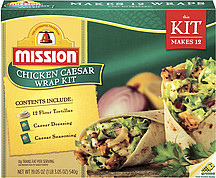 These could not have been easier to make.  To save myself some time, I bought the thinly cut chicken breasts, that you could use for chicken cutlets.  This made the actual chicken cooking time only about five minutes.  After cooking, you add the seasoning packet and 1/4 cup of water, and let the mixture boil.  That happened in under five minutes.  I seriously hadn’t even had time to clean my lettuce by the time the chicken was cooked!

I warmed the tortillas in the microwave for about 20 seconds, and in literally under 15 minutes, dinner was on the table!  The kids opted for ranch dressing on their wraps, while Jim and I used the Caesar dressing included with the kit.

As for taste, they were quite yummy.  I was tempted to add some shredded cheese, like you might find on a Caesar salad, but the seasoning packet contains Parmesan cheese, so you really don’t need it.  We found the seasoning to be spot on, and really, to save yourself some fat and calories, you could probably have left off the dressing entirely and still had a really nice Caesar flavor.

The kit cost about $3 in the store, and we added, obviously, the chicken for around $4.  The lettuce was about $2, but I only used a few leaves and have plenty left for a salad for another day.  The kit makes 12 wraps, but we realistically got 8 with the recommended amount of chicken.  I probably could have stretched the chicken out a little more, but if nothing else, we saved the calories on the extra tortilla.

I would absolutely buy these again, but I do have to think of a side dish that works well with these.  If you think in terms of restaurant chicken wraps, they usually come with chips or fries, which kind of blows the whole healthy eating kick.  Definitely something to work on.