I may have mentioned a passing fondness for Starbucks.  Once or twice.

When we came back to Seattle after our Alaska cruise last summer, we took our “every time we’re in Seattle, we must….” visit to Pike Place Market, which includes a trip to the very first ever Starbucks store.  The Mecca.

We built up the excitement by putting off the stop at Starbucks.  We strolled through the market, bought things that we had no idea how we’d get on the plane and home, and when the anticipation was too much to stand, we headed over for our drinks.

We bought a souvenir for my friend Sandi, a Starbucks manager who was watching our dogs for us.  It was the first time I think we’ve ever purchased anything but coffee, but since our last visit, we have become more frequent users of our registered Starbucks gift card, which gets us points to get free drinks.  Jim saw this card, depicting the original store, and we decided we loved it (okay, I decided I loved it) and bought it.

The card became quite a conversation piece whenever we went to a Starbucks store.  The baristas always made a comment on how neat it was, and none of them had seen one like it.  I loved that card.

Then it got lost.  I say it got lost so as not to point the finger of blame in any particular direction, especially not the one with the adorable balding, dimpled man standing in it.

We called Starbucks, who cancelled the card and called the store.  They spoke with a manager, and she offered to send one to us to replace the one we lost.  We waited weeks and weeks.  It never arrived.  Then we took the car to be detailed.  Lo and behold, there was the missing card!! 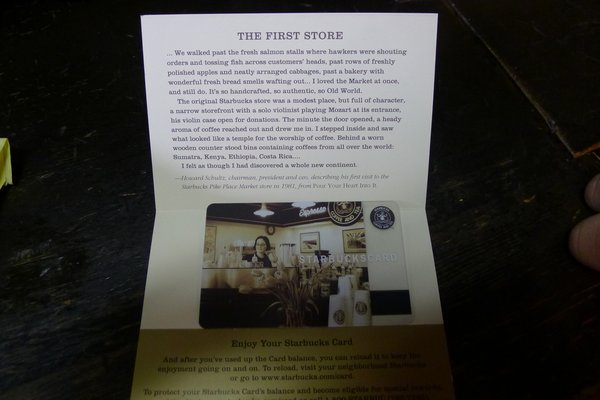 The card is cancelled.  Why no, they can’t activate it again, it’s been reported lost or stolen. No, they don’t know where the replacement one is that we never received.  We got quite a run around.

Until we finally got Nica Tovey on the phone.  She is the Super Starbucks lady who saved the day.  Faster than a speeding bullet, she got a replacement card in the mail to us, and I am now in possession of my favorite Starbucks gift card, ever.

And I am so thankful for Nica Tovey today!  I have no future trips planned to the west coast, didn’t know when I’d be able to personally pick up another one, and she was so kind and so helpful, she got one right out to me.

That is what real customer service is all about; that’s what Starbucks is all about.  And I’m thankful.