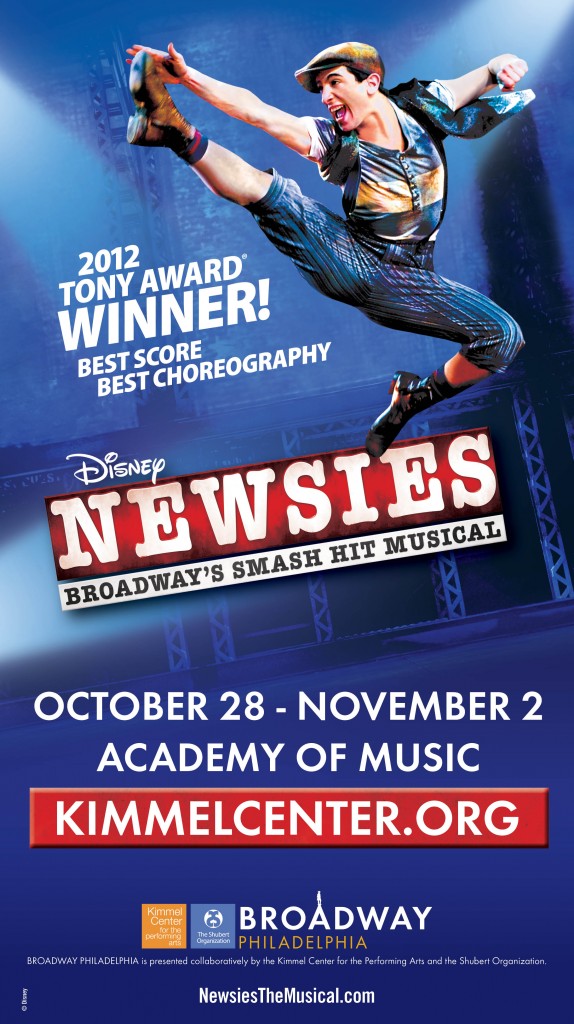 There will be way more treats than tricks this Halloween!

The Kimmel Center Academy of Music will be featuring an extra-special KIDS NIGHT, next Friday night, Halloween.  Hosted by BEN-FM’s Marilyn Russell, the steps of the Academy will be filled with Halloween fun!  You’ll find a photo booth, Halloween goodies, and a performance by dancers from the Philadelphia High School for Creative and Peforming Arts.

But the fun doesn’t have to end on the steps of the Academy!  Select seats are being offered at 50% off!  Disney’s Newsies is a great way to introduce your kids to the theater – and a phenomenal way to cap off your Halloween night.

They delivered the papers, until they made the headlines… Direct from Broadway comes Newsies, the smash-hit, crowd-pleasing new musical from Disney. Winner of the 2012 Tony Awards® for Best Score and Best Choreography, Newsies, has audiences and critics alike calling it “a musical worth singing about!” (The New York Times) Filled with one heart-pounding number after another, it’s a high-energy explosion of song and dance you just don’t want to miss.

Based on true events, Newsies tells the captivating story of a band of underdogs who become unlikely heroes when they stand up to the most powerful men in New York. It’s a rousing tale about fighting for what’s right…and staying true to who you are. Newsies was brought to the stage by an award-winning creative team. It features a score by Alan Menken (Beauty and the Beast) and Jack Feldman (The Lion King II: Simba’s Pride) and a book by Harvey Fierstein (La Cage Aux Folles), with choreography by Christopher Gattelli (South Pacific) and direction by Jeff Calhoun (Big River).

For tickets to Newsies – and other Broadway-Philadelphia shows at the Kimmel Center – visit www.kimmelcenter.org/broadway.