I have not yet told Eilis that my mom has died.

Shortly after 10:00 PM last December 23rd, my sister called to tell me that the hospital had just called to tell them my mom died.  I hung up the phone, crying out loud, and called my family to me.  Eilis, instead of joining Jim and Granuaile next to me, raced away from the room yelling, “I don’t want to hear it!”

And I think in that outburst, she found a place in her mind where if she didn’t hear it, it didn’t have to be real.

Eilis and my mom were fast friends.  We moved back to New Jersey when Eilis was four months old, and from the time she was just a few months older, she loved spending nights at Dram’s.  At 18 months old, she would pack her own bag, anxious to have even just a few hours in my mom’s company.  They would play for hours, exhausting each other with laughter and songs, and my quiet, reserved Eilis came into her own with my mom.  She seemed more animated, more outgoing, more loving.  Eilis wasn’t a huggy kind of kid.  She would sooner hug a tree than a grown up, but with my mom, she was so different.  Eilis was her true self with my mom, and the two of them were like soulmates, destined to find each other on this earth and complete each other. 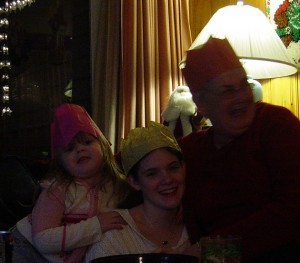 The day my sister Bean died, my mother took Eilis home with her.  Instead of going home to fall into the desperate pit of her own grief, she wanted Eilis to be with her, and my tiny two year old was anxious to go.  She didn’t leave my mom’s side, know ing even at this tender age that she had a job to do, making sure her kindred spirit survived the first few devastating days after Bean’s death.

One weekend, during one of their infamous sleepovers, my mom got sick. 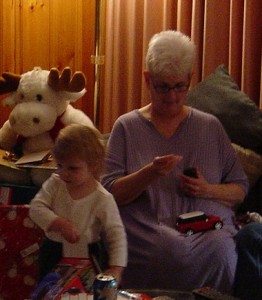 An ambulance had to be called, and Eilis was there as they lifted my mom’s pain wracked body onto a stretcher and into the glowing cavern that was the back of the emergency vehicle.  The police came, there was a cacophony of dispatching calls coming over the squawking radios, and the lights and sounds were just too much for my sensitive kid.

It was the end of the sleepovers.

Eilis was afraid to go spend the night after that, and my mother knew.  She talked to me often about how guilty she felt over Eilis being exposed to human frailty in such a traumatic way.  I had a hard time getting Eilis to even go visit after that, and she was more than happy to pass on the mantle of best sleepover buddy to Granuaile as she got older.  Eilis didn’t get over it, silently lamenting the loss of this precious bonding time, and I think it impacted her more than we ever realized.

Today, after one of her increasingly rare visits to my stepfather at the home heshared for nearly 40 years with my mom, Eilis and I were driving home.  We were talking about our annual visit to Walt Disney World this coming Christmas, the first one we are taking with my sister, her husband, and my stepdad.  In between conversation, she was singing along to theCD she had popped into the car stereo.  And then she was crying.  The tears were silent, yet they poured as if a flood gate had been opened down her cheeks, dripping onto her shirt.  Quietly, acknowledging for the first time the loss she suffered last December – if not those many years ago – she said, very simply, “I miss Dram.”

I can do nothing with my own broken heart except pray that this is at last a step toward healing for Eilis.  Perhaps this is the beginning of her heart accepting – or at least understanding – the loss she has suffered.  And even though they can’t be together, maybe this is the point where Eilis lets the memories be of some comfort.  Maybe she can focus more on the bond they had than the separation they suffered.