I am on a quest to make as many home cooked dinners as i can.  I am approaching the two week mark since I started, and while some days were “cheater” days (we went out to lunch once and had left overs for dinner, and my parents took us out to dinner one night, and we had leftovers the night after), except for a Friday night pizza and a movie, I have been in the kitchen every night making something for dinner – even if it was just reheating those leftovers.

As a Catholic kid, Lent always meant no meat on Friday.  A lunch staple was egg salad.  I am not an egg fan.  I would never wake up in the morning and want eggs for breakfast if there are pancakes, blueberry muffins, or even Oreo cookies available instead.  My grandfather used to make my sister Bean and I hard boiled eggs for breakfast once in a while, but he would careful cut the top off, stuff the hard cooked egg with creamy butter, and sprinkle a healthy dose of salt on top.  It was  heaven in an egg cup.  But egg salad for lunch was just plain gross.  I hated Fridays during Lent.

But as an adult, I’ve come to terms with the place egg salad serves in my life.  It’s a quick, go to meal on a night when we need to go grocery shopping.  It is strangely comforting on a chilly day for lunch.  There are days, despite my dislike of eggs, I just crave egg salad.

Here’s the thing, though.  I can’t eat egg salad out.  No matter how appealing it sounds, the taste of egg salad in a restaurant or diner just always seems off – too much mayo, onion, celery – something to ruin the taste that I’m familiar with.  And I don’t want it paired with anything – no soup, no bed of lettuce, no weird side dish.  I might be okay if you toss a few chips next to the sandwich, but mostly, I just want it plain.

Worst of all – I cannot eat the egg salad that has fallen out of the bread during eating.  I know, weird, right?  I think it’s a textural thing.  There has to be either nice soft white bread around the salad, or their has to be warm toast. 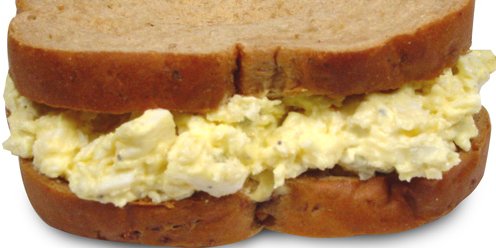 So – here’s how I make my egg salad – check out the precision with which I prepare this.

Mayonnaise – enough to moisten the eggs, but not enough to make it slimey (I use a big spoon, and it usually takes about 3 heaping spoonfuls – serving spoon size)

I prefer to serve it on toasted bread, and I prefer it cut into four triangles, which almost makes it seem like four tiny sandwiches, and makes me forget about the fact that there’s still some level of my being that dislikes egg salad.  No lettuce, no tomato, no celery, and definitely no avocado.  Blech.  I might get brave and try tossing in some chopped bacon someday.  Someday.

I’m such a weirdo.