So, a while back, I posted about slider foods and how they will make you fat again after you’ve had gastric bypass surgery.  You can revisit that post here – https://www.beautygirlsmom.com/2008/02/10/slider-foods-will-make-me-fat/

And now you can see that my arse is living proof of how slider foods will cause you to regain and start checking Weight Watcher points and wearing stretch pants.

You can see from the explanation on the previous blog on slider foods that basically what happens with simple carbs is they “slide” right through.  You can eat, eat, and eat without suffering any of the dumping, discomfort, or anxiety over dumping and discomfort.

Here’s the thing – for a lot of us, we really don’t know that full feeling.  We don’t recognize that feeling at the Thanksgiving dinner table when people are pushing their chairs back and saying, “No more, no more – okay, well until dessert.”  I know I certainly didn’t.  I mean, I knew when to back away from the table because everyone else was doing it, and, well, someone had to do the dishes.  But I often stood in the kitchen, snacking on the already carved turkey leftovers or nibbling on the sausage out of the stuffing while I put food away and put dishes in the dishwasher.

Eating slider foods is just like that.  There is no feeling that you’re full.  I can go to a movie theater and get a large popcorn, and even gastrically altered, I can down the whole thing by myself.  I can buy a bag of pretzels for the family to snack on, and before I know it, I’m reaching for the last one before the kids even know the bag is in the house.  The funny thing is when I first realized I could eat pretzels, I would dip them in cream cheese, figuring I’d get a wee bit of extra protein while I was eating them; but after a few pretzels with cream cheese, I’d start to get an uncomfortable feeling and stop eating the cream cheese.  That lets way more pretzels go down!

I think the key to the slider food issue is not to start eating them.  There is virtually no nutritional value to you in pretzels, popcorn, and crackers.  You’re consuming calorie after calorie with none of the risk you have with protein of feeling full. 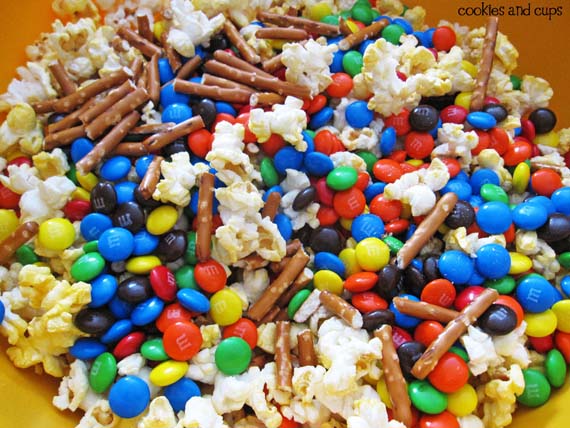 Slider foods have almost become an addiction.  I keep saying I won’t buy them, but when I’m standing in the grocery store thinking of what I should pick up to snack on (because you are still going to want SOMETHING to snack on), I never think something good for me like Greek yogurt, light cheese, grilled chicken strips.  I always think of something I know won’t give me that uncomfortable feeling.  But THAT’s the feeling I NEED.

There’s a lot of head stuff involved with being gastrically altered.  You think that once the issue of your plumbing is sorted out, you are in the clear, but you’re not.  I think I am a compulsive eater, and while gastric bypass surgery certainly helped make it harder for me to eat to my heart’s content, the objects of my desire have changed so I have the freedom to put more food into my mouth without worrying about uncomfortable consequences.

This is so not the fun part of gastric bypass surgery.

Champions!  Yeah, that’s what I meant to say.

So the “I’m getting serious about losing weight” thing a few months ago?  That took a back seat to “Holy Jesus, did I sign up for SEVEN classes this semester?  We’re ordering Chinese. Or Pizza. Or Burgers.”

And here I am, after an initial super job at losing the weight, finding it back again 🙁

Oh, and did I mention, I have a life insurance physical in two weeks?  And when I actually applied, I put the weight that I WANT to be on the application?  You know – it was like going to the DMV, when you put the weight that you were when you got married – but there, the guy taking your picture just snickers and snaps the photo of your triple chins, hoping the cops that pull you over don’t think you are driving with fake ID.  With an insurance physical, the nurse is coming armed with a scale.  And I don’t think I can get naked in front of her, claim it’s water weight, tell her I ate ball bearings for breakfast (maybe if it wasn’t a fasting physical?), and wish for the best.

So, I’m on a SERIOUS serious diet this time.  Breakfast, Muscle Milk protein shake, and something protein-y for dinner.  Yum. 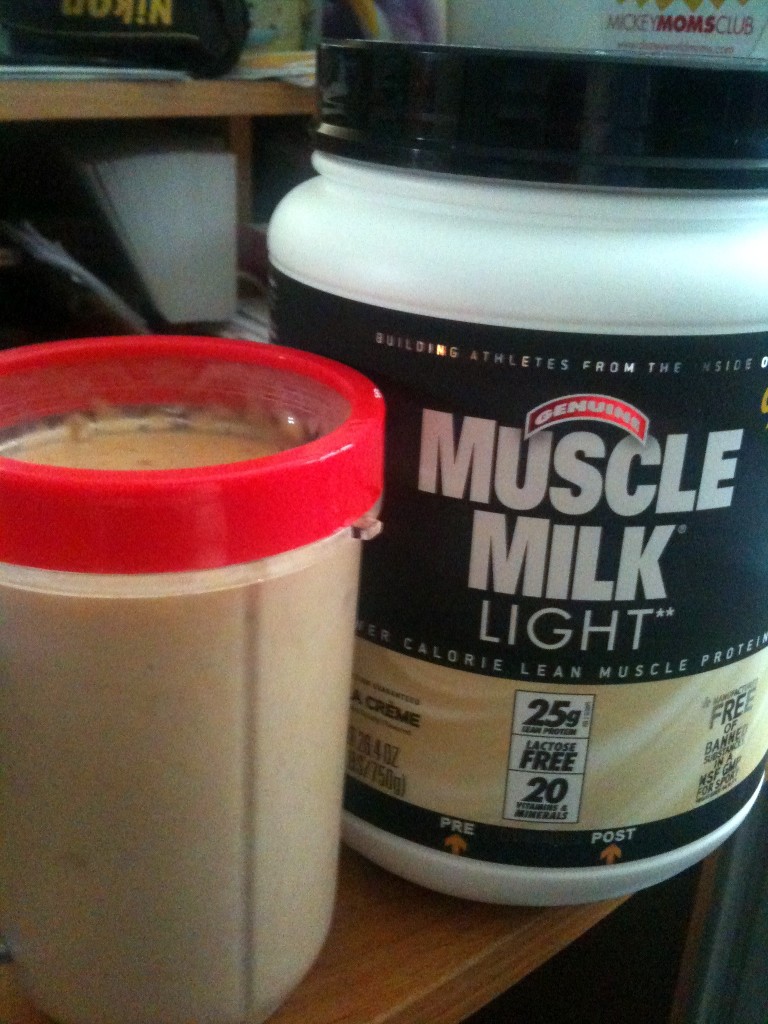 Protein shakes are not my friends.  Post gastric bypass, I was supposed to be living on them, but they’re yucky.  No one wants to live on yucky.  I found one I could tolerate, but only if I doctored it up with instant flavored coffee and fruit and junk.

I bought Muscle Milk Light this afternoon, to use as my midday meal.  I opted for the Vanilla Creme flavor, thinking that if I needed to add stuff to it to make it palatable, more stuff goes with vanilla.

The first thing you notice when you open the container is that it is VERY vanilla.  It’s sweet and pleasant smelling, as opposed to some, which are very chemically smelling.  I mixed two scoops with a little less water than you’re supposed to, but I always do that, so I don’t have to drink as much 🙁  Without tasting it “plain”, I added a spoonful of peanut butter – old habits die hard 😉  Then I filled the cup with ice and made my shake.

The drink, even with the peanut butter is REALLY sweet.  It’s not necessarily a bad sweet, but it’s definitely sweet.  The vanilla is stronger than the peanut butter, so I don’t really taste the one tablespoon full of peanut butter that I added – but adding two will add too many calories.  The two scoops of Muscle Milk are 210 calories, with a generous 25 grams of protein.  With only two grams of sugars, it’s a great option for the gastrically altered who dump on too many sugars – total carbs are only 13.

I think the next time I make it, I might throw in a bit of orange juice instead of the peanut butter, making it more of a creamsicle type of drink.  It will help cut the vanilla sweetness a little, and make it more of a summery drink than the disappearing peanut butter did.

Just in case, I bought the smaller container, but I’d definitely buy this again.  I think I could drink it straight if that was necessary, but I think it will adapt well to other added flavors.