Thanks for the memories.

That was my alternate title for this blog, because I am a Magnet Mom.  My refrigerator and freezer are crammed full with the magnets my kids learned their alphabet with, magnets from places we’ve been, magnetic picture frames that hold photos of my girls special moments and the photos of families and friends, and magnets that hold the best tests, art work, and notes from my girls. 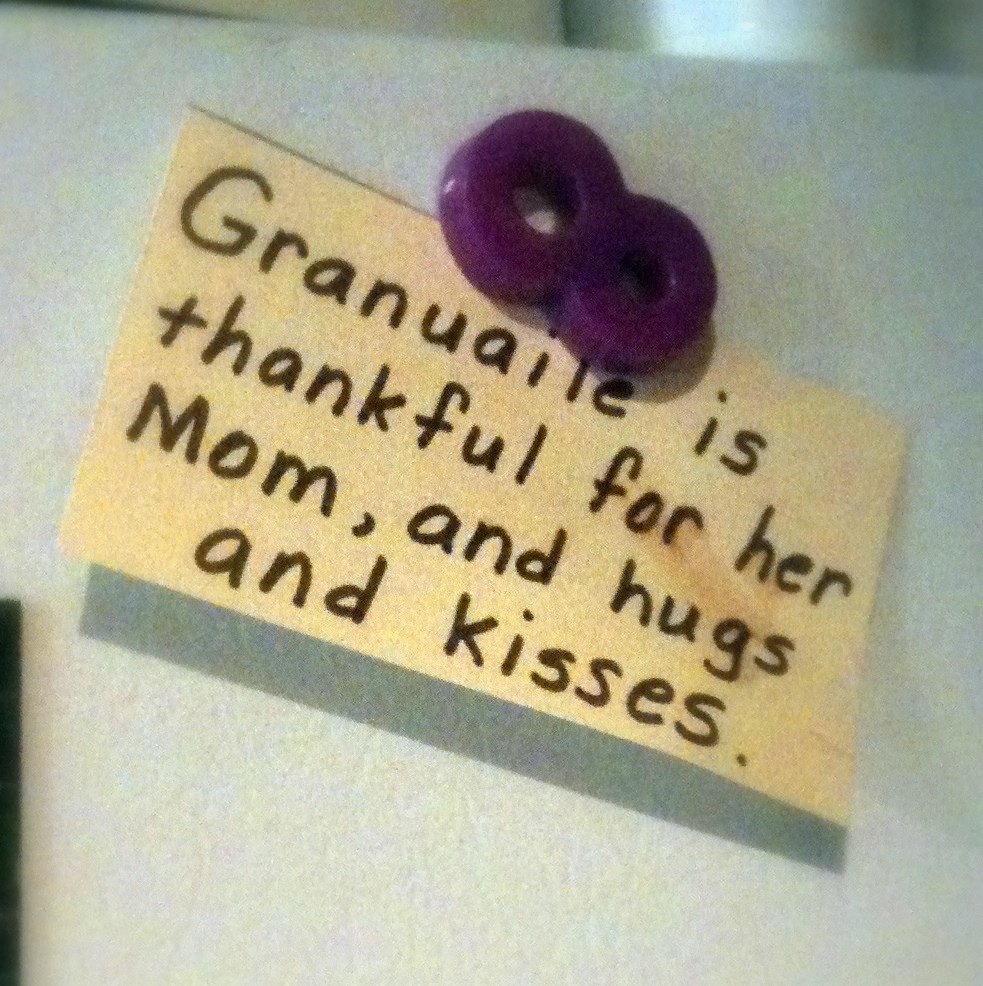 In my excitement over getting new appliances, it never actually occurred to me what I would be losing.  We did all the appropriate research, and found appliances that were going to work well with our lifestyle and suit our needs.  But I forgot that magnets ARE a need.  I wanted an ice maker, French doors, no can holder that would be wasted space for our family of bottle users.  No where on my list of “wants” was there “Must be capable of allowing magnets to stick”.

So, we ended up with a brand new, stainless steel, Electrolux, French Door refrigerator that has all the bells, whistles, and lack of a can holder that we were looking for.  And it won’t allow magnets to stick.

While I try to make room on my downstairs freezer for the stories of my life, here is where some of the greatest artists, best spellers, and most photographic children have resided for the past 20 years of this family’s existence. 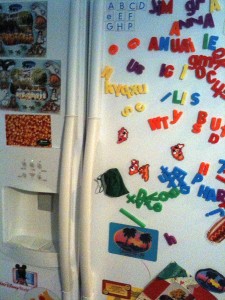 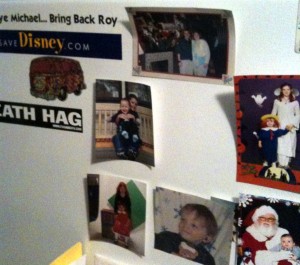 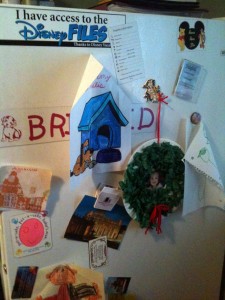 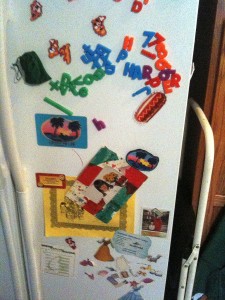 I asked Jim to make this year’s Christmas party invitation into a video. He took the 20 pictures and 2 songs I gave him and made a short movie for me to send out. But he also made me a 60 minute DVD of family Christmas video moments.

Oh my.  The first tears fell when I saw my sister, Bean, on camera.  She was a younger, healthier version in the video than the one we lost 7 years ago.  In her mid-20’s on the video, you could still see the ravages of the condition she suffered from, but she was moving more spryly and speaking more clearly. 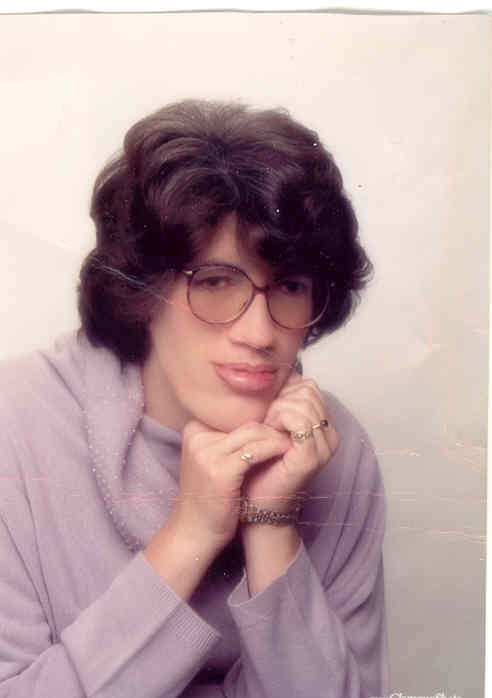 Then there was the very first Christmas I was a mom.  My tiny Brighid lay bundled in an afghan made by my Grandmom Fee, squeaking in her teeny baby voice that it was time to get up and see what this Christmas thing was all about.  Yeah, I cried my eyes out during that part, too. 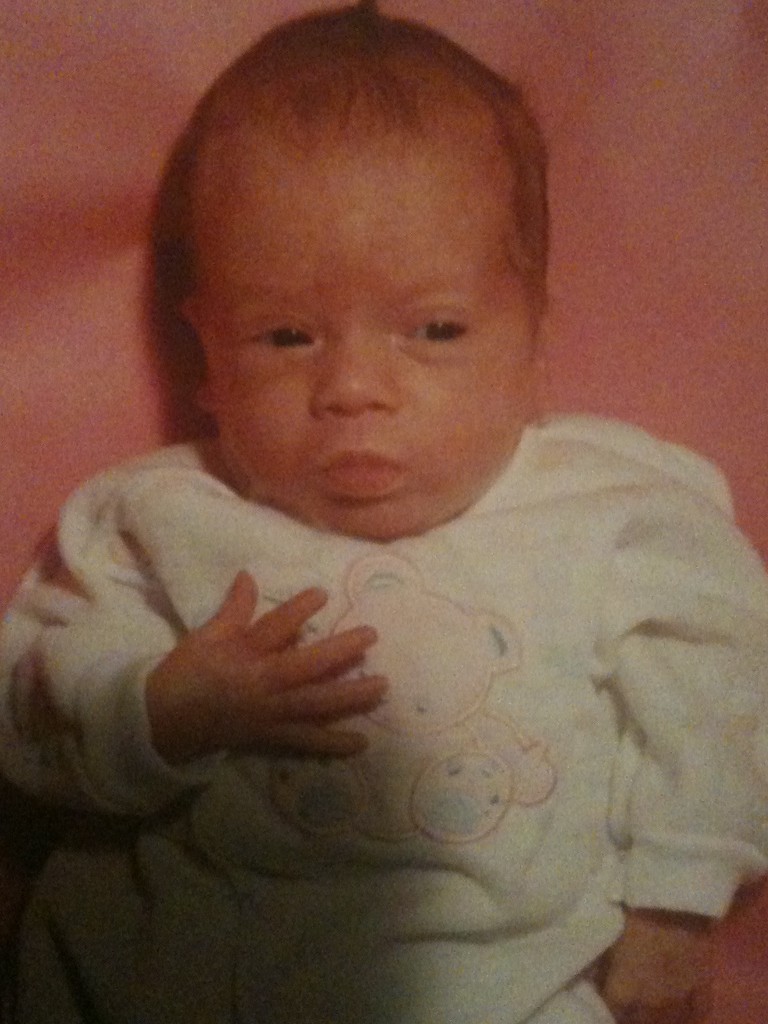 There was the voice of my father-in-law, Custy, who we lost the year before Bean died; and my beloved dog Lucy, who died at the ripe old age of nine when Brighid was about seven.

In the video was my sister Megan, who has grown up to be a beautiful, amazing, and incredibly strong woman; but she’s only 13 in the video.

And there are pictures of my Mom – even younger than she is in the photo above with Megan – crawling on the floor with Baby Brighid.  She is a much healthier version of her present self in the video, and it’s a Mom I miss so, so much.  I pray every day she gets some of her strength and lust for life back. 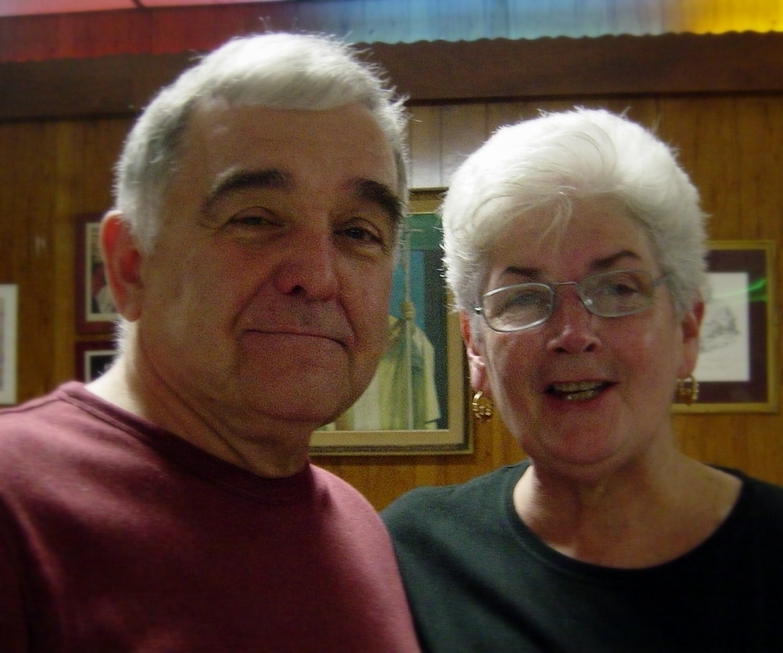 My mom and stepdad

Christmases past.  The memories are as sweet as the most delicious Christmas cookies.  But the regret as real as that which Ebeneezer himself experienced.  We let too much get away from us.  In our efforts to wrap the most presents to put under the tree, or prepare the biggest feast, or decorate the tallest fir, we forget how valuable the moments with our family and friends will be when the moments slip away.

Enjoy each other this holiday season.  Put down the Wii-mote; turn off the television; back away from the computer; and as hard as it may be, place the camera on the shelf.  Live in the moment, love each other, and cherish the season.