I’m a sucker for a reality competition.  Cooking shows, weight loss competitions, Amazing Race – I love them all.  And Christmas is my all time favorite holiday, with the bright lights, the family, and the warmth you have to generate yourself to combat the effects of Old Man Winter.  When I saw the commercials for the Great Christmas Light Fight on ABC, I was skeptical.  I thought they were going to take us on a tour of the tacky – the houses that look like they threw up lights, without any rhyme or reason, just to have the biggest display on earth.

Boy, was I wrong.

Okay, not entirely wrong.  There was one family that I truly got the “Ick” feeling from, feeling like they were doing their display more to garner their 15 minutes of fame or launch a music career, but the other families seemed to genuinely have the Christmas spirit.  They did the displays to share the season with friends and neighbors, strangers who came from afar to see the display, and now us, the television viewer. 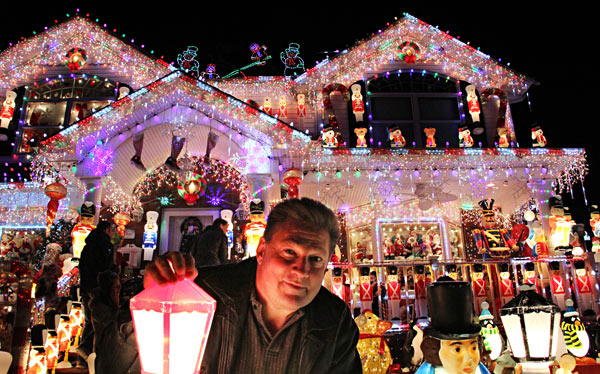 I chose a favorite early on – a retired New York City firefighter and his wife, Kevin and Tina Lynch from Whitestone, NY – not because they had the biggest display or the greatest number of inflatables or the most lights.  I really felt they had the most heart.  Their house oozed the true Christmas spirit – a little bit wonder and amazement, it captured the Christmas of my own childhood.  It felt familiar, in a nostalgic way.

I thought I was going to be so disappointed in this show, but I loved it.  I thought it would be difficult to determine a winner, but I knew right away who I would pick – and so did the show’s judge, Michael Moloney, from Extreme Makeover:  Home Edition fame.

The show will run Monday nights from now until Christmas.  If you need a touch of the holiday spirit, you just might find it here.