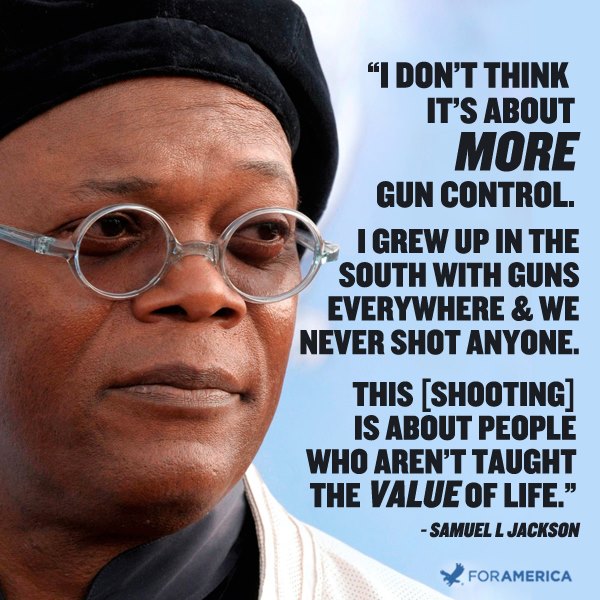 Oh, Samuel L. Jackson, you are a wise man.

When the Newtown, CT shooting occurred, I was away from my children.  The shooting impacted me, but I was busy, celebrating with friends, and had the Happiest Place on Earth surrounding me to cushion the effect.

My kids were in the car at the airport when I came home, and it was all I could do to hold it together until I got home.  Silent tears streamed down my face, and silent prayers were recited in my head.  They were prayers of thanks that my own children were safe, prayers of comfort for the victims of the tragedy, and prayers of hope that the rest of us would find answers to why we keep killing each other.

And there, in the words of Samuel L. Jackson is the answer.

I watched the Roadrunner growing up and must admit that I never felt compelled to drop an anvil on anyone’s head.  We were allowed to watch the Three Stooges routinely beat each other up, and yet my fingers never found themselves in the eyes of any of my sisters.  I understand that with video games, television shows, movies, and the internet, kids today are exposed to more acts of violence than we ever were as kids, but where is our responsibility in all of this?  Where are the moms telling the kids, “If I ever see you do anything like this, I will beat your ass so you won’t sit down until you’re married!”  Why do we not teach our kids to value life, respect people, respect property?

I don’t know if stricter gun control laws are going to do much to change our society.  Stricter kid control laws might be a better way to go.