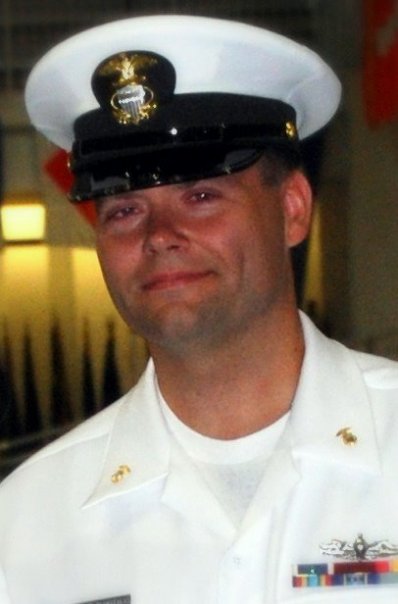 When I met my husband, he was in the Navy.  At the age of 24, which I was when I met him, that meant hot buns in a cool uniform.  Yeah, I said it.  My husband has a cool uniform.

It took me a while to realize the sacrifice that comes with getting that cool uniform.  Jim was injured while refueling a ship at sea.  His eyes sprayed with a chemical combination similar to the dip used to destroy the cartoons in Who Framed Roger Rabbit, his hand cut with a knife and requiring stitches, he stayed and finished the unrep (underway replenishment) before seeking treatment in sick bay.

The damage was done, even though we didn’t know it until some time later.  Days after the accident, he was repainting a portion of the ship, when a superior came by.  He pitched a fit, yelling at Jim about the paint job.  Jim scanned the work for missed spots or serious streaks, when the officer finally got in his face and screamed about Jim painting the area the wrong color.  Jim couldn’t tell.

After months of treating with Visine and Tylenol, he finally came home to see a civilian eye doctor.  The chemicals caused an oxygen deprivation to his eyes, there was scarring from the chemical splash, and his vision was beginning to deteriorate.  He would eventually become legally blind.

And my husband is just the tip of the iceberg when it comes to men and women who have served, sacrificed, been injured or killed, all on our behalf.

Too numerous to count, too painful to think about, today is the day that we honor those who gave some and those who gave all for our country and our freedom.  The debt of gratitude is one we can never repay, and one they never expect us to repay.

For them, I am thankful; blessed and thankful.