To be fair, they no longer refer to themselves as Jay West Imports.  Even the sign outside now only says Jay West.  I guess we can abandon any hope of them importing anything, least of all decent customer service. 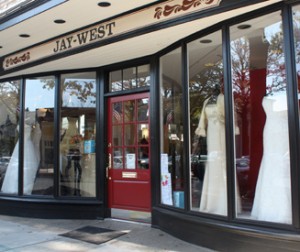 For years, I’ve been driving past the gorgeous gowns in the window at Jay West in Haddonfield, NJ.  I have only ever purchased one dress there, and it was Brighid’s Sweet 16 party gown.  Service then was fair, but Brighid saw her dress relatively quickly and we were in and out in less than 20 minutes.

When my sister announced her engagement a few months ago, I started admiring the windows again.  Whenever I’d see something I loved, I’d call Brighid and tell her to drive by and see it, knowing that Megan would hate it anyway.  But the gowns in the windows change quickly, and the styles are quite varied, so I thought it would be a great place for us to take Meg on the hunt for the perfect gown.

The store surprises you – it’s about the size of a bread box.  I had to make sure I had my Spanx on just to fit in the doorway.  Megan’s appointment was for 1 PM, and we were about 25 minutes early.  We expected to wait for a consultant to help us since we were so early, but the woman at the counter handed us off to one of the other consultants, and we were escorted past the velvet rope to the downstairs bridal area.

You don’t really get to look for dresses here.  The consultant asked Meg what she was looking for, and I thought we were pretty clear that we wanted plain, simple, nothing with lace, and it had to be light and casual feeling for the upcoming beach wedding.

To begin with, the consultant made us feel like we interrupted her private audience with the Pope.  She CLEARLY did not want to help us, and when we told her how simple of a gown we wanted, she must have seen visions of a hefty commission diminish before her very eyes.  She walked us around the tightly packed room, grabbing gowns here and there, asking two more times if Megan would look at something in lace.  We ended up with about six gowns that Megan approved, and we headed towards the fitting room.  It was at this point that the consultant asked what size bra Meg wore, so she could bring her a long line, strapless number more suitable to trying on gowns.  When she found out just how fortunately blessed my sister was in the area of bust size, she very quickly ruled out at least two of the dresses she had pulled, claiming that there wasn’t a way to wear any bra with them, and there wouldn’t be enough support for someone so well endowed.  Well, then why didn’t you ask that as one of your first questions?

Another thing she never did was ask if Megan had a budget.  Can you imagine finding the dress you love and can’t see yourself walking down the aisle without, only to find out it is way out of your budget?  That would be an absolute tragedy.

After we bothered her through trying on four gowns, she suggested we pull a few bridesmaid dresses, because Megan’s tastes were so simple, there wasn’t a wedding gown that would suit her anywhere in the real world.  She may not have used those words, but she completely stopped trying to find a suitable wedding gown.  She pulled about six very similar in style bridesmaid dresses, then seemed irked when Megan actually liked some for her bridesmaids.

She wandered off for a minute, then came back with a gown so heavily beaded, we’d have to get a front loader to get Megan down the aisle.  She tells Megan to “indulge her” and put the gown on.  It is a corseted style gown, which she mentions NOW, after we’ve already tried on a bunch of dresses, is really a good style for my sister because of her shape.  The gown looks stunning on (but so would a burlap bag on my sister), but is in the completely opposite direction of what Meg wanted.  Does this woman suggest they have something simpler in a similar style?  She does not.

So after being made to feel that we were completely irritating her that we walked into the store, she disregarded most of what we told her Megan wanted, then we were subjected to her telling us we were never going to find a wedding gown like Megan wanted unless we went with a bridesmaid gown.

We left, feeling disheartened from the experience.  I’d never go back there again.

Did we get a wedding gown?  Yes.  Was it the shape, style, and simplicity that my sister wanted?  Absolutely.  Did the consultant in the other store treat us like a nuisance?  Not only did she not, but we went in without an appointment and she still made us feel welcome.

Jay West is a long standing business, and they must be doing something right somewhere.  We just didn’t see it anywhere during our visit.