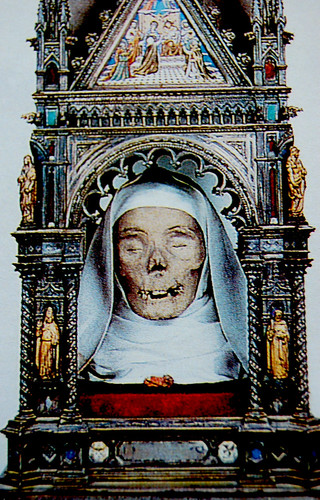 Saint Vincent Palotti is certainly on the list of Incorruptibles, but I had no idea how very close we would be to the Church in Onda, where he is interred.  He is of particular interest to me because we pay beaucoup bucks in tuition for our kid to go to a high school run by the order of the Pallotines – the religious order founded by St. Vincent.  Brighid got some information on the location of the Church of San Salvatore, which is where St. Vincent’s body is, from the headmaster of her school.  He offered us information on the museum and going in to see the bedroom previously occupied by the saint, but we were nearly at the end of our day in Rome when the driver took us to Onda.  The church is very, very small, and there was a priest sort of stationed in front of the Church so you could not get too close to the glass enclosed casket which is now St. Vincent’s resting place.  St. Vincent died in 1850, and his body has remained in a fairly constant state since then.

I would say if you are in Rome, this is definitely a stop worth making if you have a little extra time.  The occasion to witness first hand the mortal remains of a saint is rare enough, but to see this remarkable state of incorruptibility is amazing.

The Church of San Salvatore is located at 51 Via dei Pettinari in Onda.  Another interesting fact about the house here – a young Karol Wojtyla spent several weeks living here as a young priest in 1946.  As you know, Father Wojtyla became the beloved Pope John Paul II.

2 Replies to “The Incorruptibles and a Visit with St. Vincent Pallotti at San Salvatore in Onda”