Jim ordered the Indian rice pudding, kheer, which is more of a soupy version of what you expect rice pudding to be.  He loved the flavors, although admittedly, the lack of “pudding” was something to get used to.  This was not my Grandmother’s rice pudding, creamy and thick, then baked in the oven to get a nice golden layer on top.  It was tasty, though. 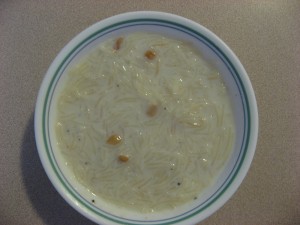 I opted for the kulfi, an Indian ice cream made with pistachios and walnuts.  I’ve never had this before, but found the texture a little off putting (like ice cream that has been in your freezer too long), and the taste overly sweet.  It did have some interesting flavors, but the texture kind of killed it for me.  The kids’ chocolate ice cream looked much creamier than what I was eating.  It was pretty, though. 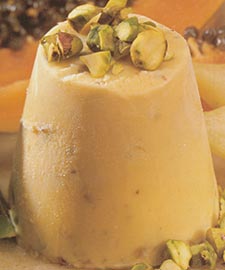 Dinner for the four of us, including tax and tip, came to about $140.  This is way more than we would usually pay to just go grab dinner somewhere, but this was my birthday dinner, so we splurged.  We also came home with enough food to feed the whole family another meal – if the whole family was going to eat it.  Since it will likely only be Jim and I eating the left overs, we can eat all weekend!

You can find Cross Culture Indian Cuisine at