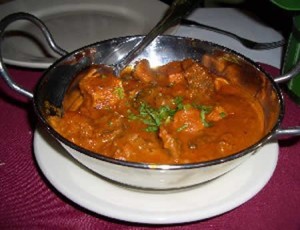 I knew Jim would want spicy, and I felt like the meals the kids and I ate had to be toned down – flavorful without burning our faces off.  We had thought we’d order only two entrees, but there was so much on the menu that looked like it would be delicious, we ended up ordering two entrees for the kids and I to share, and a chicken vindaloo for Jim.  He not only enjoyed the spiciness of the dish, but the sweat running down his head and his neck indicated that it was indeed spicy enough for him.  I took a small bite.  Yeah, it was spicy enough for him, because it nearly killed me.

The kids and I were going to tuck in to the Chef’s Special Biryani, which was basmati rice cooked with shrimp, chicken and lamb, cashew nuts and golden raisins, and combined with saffron and light spices.  It was delicious, with texture that was like a surprise party with every bit.  Wonderful dish!

I also opted for a traditional lamb rogan josh, which you can find on any Indian menu.  It was well prepared, although the amount of lamb was a little sparse.  The kids deemed it too spicy, but I enjoyed it very much. 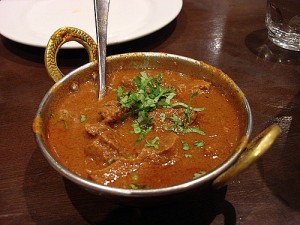 What’s for dessert?  Find out next…