Granuaile, the child who obviously was switched at birth with a child from Boston, a belief I hold based solely on her accent, has decided she wants her ears pierced.  Actually, I’m sort of convinced she has been manipulated in some way by her big sister Eilis to get her ears pierced, but never the less, I find myself on a Friday afternoon at the Sweet and Sassy Store, asking to have them puncture holes in my youngest child.

She is so excited, she can barely contain herself, bouncing in the seat of the big chair that I am sure will soon look to Granuaile very much like the electric chair to someone with a death sentence.  I have to capture the excitement before the tears… 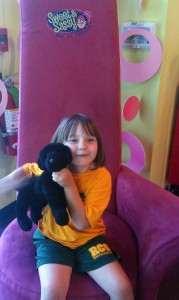 Snooki Light is in charge of our ear piercing, and she decides that in order to effect the damage to this little kid, her hair must first be pulled up.  As if the ear piercing isn’t going to be torture enough! 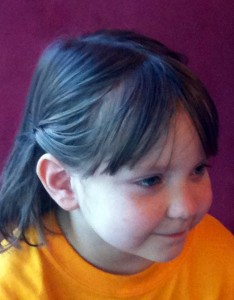 Granuaile actually got a bit nervous in the car, and asked how much this was going to hurt, so I was suprised to see her still smiling at this point.  But she was.  And she was perfectly still when Snooki had to mark her ears. 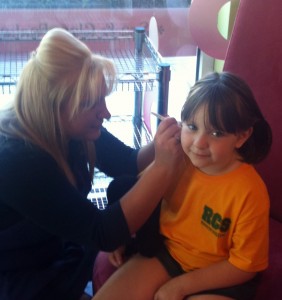 I am still waiting for the nerves to kick in and the tears to begin falling, then I gradually begin to realize that I may be the only one fighting back tears.  Granuaile is being a champ through all of this! 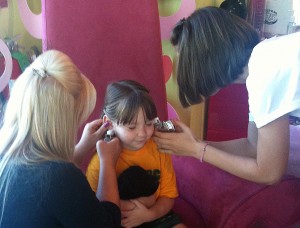 The tag team piercing takes a second, and we all stand there waiting for the crying to begin.  It doesn’t.  Snooki (my apologies to this dear girl, who bore an uncanny resemblance with her Jersey girl hair to Snooki – I’m sure she had a nice normal name like Sue or Ann or Mary) asks Granuaile if she wants to check herself out in the mirror, and Granuaile bounces out of the chair to be escorted to the mirror.  Snooki says to her, “Are you in some kind of shock?”  Granuaile answers no.  Does Granuaile even know what “some kind of shock” is? 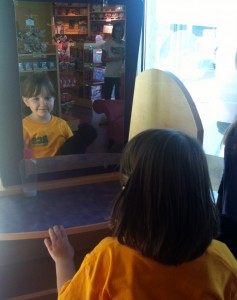 When we are all finished admiring the sparkly blue earrings Granuaile chose, she is invited over to the Sweet and Sassy stage, where the paparazzi (Snooki again) will take some pictures of her.  She feels like quite the superstar. 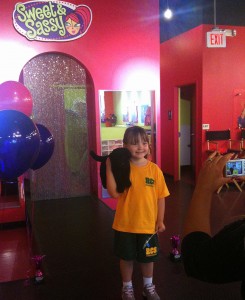 Sweet and Sassy gives the kids a certificate, with the photo they took on stage attached, and Granuaile signs her certificate as if she is the President passing a law.  So cute.

Ummm, Snooki?  She’s five. She doesn’t know how to spell “The person I can’t wait to show my new earrings to is…”

And the only one who cried was me.  I did good, though, waiting until we were in the car.  The first person she wanted to call was Brighid, my oldest child, who had the decency to cry along with me when she got her ears pierced when she was five.  Granuaile excitedly said to Brighid, “I got my eyahs peyaced!”  And I started crying.  I am going to miss those tiny little, puncture free ear lobes.  And some other things you miss when babies grow up.