If it’s just me, I always prefer the chopped salad.  It’s easier to eat, they usually throw in all sorts of bonus proteins like eggs, avocado, and bacon.  But the waiter come over with the incredibly glowing recommendation for the Italian Tossed Salad.  He said, “It tastes just like the Olive Garden salad!”  As we all know, people only ever eat at the Olive Garden for the salad and bread sticks, so I ordered the Italian tossed salad, and the Caesar, which Eilis wanted. 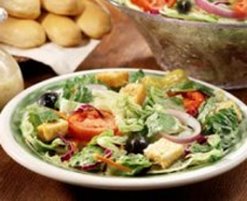 What do you know?  The Maggiano’s tossed Italian salad tasted JUST like the Olive Garden tossed salad – with all the same components.  As a matter of fact, the photo above is of the Olive Garden salad, but it looked so much like the Maggiano’s salad, I just used that one.  It had a nice Italian dressing – a little too much, as it pooled on the bottom, and had tomatoes, romaine lettuce, olives, red onion and croutons.  Tasty – just like Olive Garden.

The Caesar salad was really good.  The dressing was creamy, and the huge slivers of Paremesan cheese shaved on top were delicious.  Eilis ate nearly the entire Caesar salad on her own, but it’s okay, because if we had wanted, they would have brought more.  Just like at the Olive Garden. 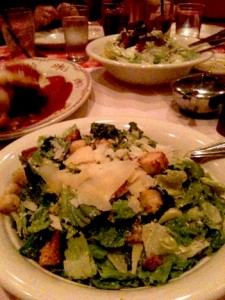 For those of you who are gastrically altered, there are options with way more protein, but one is the chicken and apple salad.  I can’t eat much in the way of chicken – it gets stuck nearly every time.  In addition to the chicken, there are walnuts in the salad, so you are getting more protein that way.  The other salad that would have been better protein wise is the chopped antipasto (which I would have ordered had the kids not been there).  That one carries a wallup of fat, though, with salami, prosciutto, pepperoni, and provolone cheese.

Overall, the salads were good, but if you have had gastric bypass, you are already too full to move on to the main course.  I did – but only for your sake.  The things I sacrifice for my blog readers!

Up next – the main courses!