I have to thank my dear friend and Disney Mom Joanne for turning me on to Wolfgang Puck Express.  I have to admit that for all the years we’ve been visiting Walt Disney World, we overlooked this restaurant every time.  We had eaten once at the regular Wolfgang Puck restaurant in Downtown Disney West Side, and it wasn’t so fabulous that we wanted to go back.  So we haven’t.  Which is probably why we never discovered this hidden gem at Downtown Disney.

OMG – two words.  Breakfast pizza.  Yes, pizza for breakfast – and not the way you ate it when you were in college – cold, right out of the box your roommate bought at lunch time the day before, praying e-coli couldn’t have set in over the course of the 16 hours it had been sitting on your dorm room floor.  This is fresh, piping hot, and delicious. 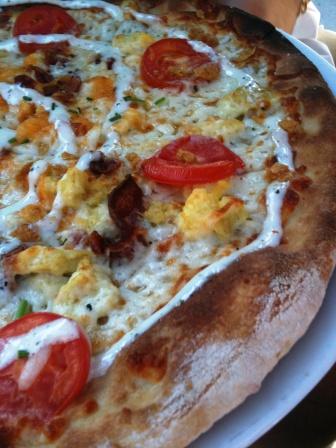 The thin, crispy crust is topped with scrambled eggs, apple wood smoked bacon, mozzarella and cheddar cheeses, plum tomatoes, and then drizzled with ranch dressing.  Oh come on – you haven’t tried it yet!  It makes perfect sense once you’ve had it in your mouth.  This is so delicious, I’d eat it for any of the three (or four, or five) meals a day that I eat.  And as far as gastric bypass patients?  I have no trouble with this at all – and I often do have trouble with scrambled eggs.  I’ve had this pizza in two visits, and both times, the eggs were cooked perfectly, not dried out and prone to sticking in my pouch.

Next on our table was the crispy cornflake French Toast.  They give you a knife and fork to eat this with, but we ended up just picking it up with our hands and dipping it into the syrup.  This is not your Grandmom’s French toast.  This is a sliced bagel, dipped in egg, then liberally treated to a dusting of cinnamon sugar and rolled in cornflakes.  The meal is dense and delicious, but for us gastrically altered folks – not friendly.  If you can handle the sugars and the carbs in this meal without dumping, that bagel will sit like a ton of bricks in your stomach.  Have your husband order it and take a bite – that’s what I did! 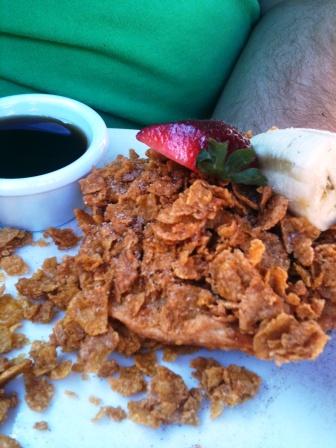 Rounding out our breakfast selections was the breakfast pocket.  First of all, we had way too much food for our family of five, and we ended up leaving that piece of french toast you see above you and half of the breakfast pizza.  But, I thought it was better to get one more thing, and the pocket appealed to Eilis, so we ordered it.  This is essentially the breakfast pizza, except with different toppings and folded over, like a panzarotti.  In addition to the eggs, bacon, and cheese, the pocket also includes ham, mushrooms, peppers and onions.  It’s huge.  Be prepared to share! 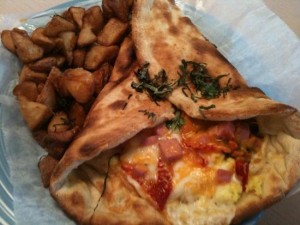 It cost right around $40 for the five of us for breakfast, and that included two bottled orange juices and a bottle of water.  This is probably about $25 more than we would have spent if we had run out to McDonald’s to grab breakfast from their dollar menu, but we could have easily eliminated the $9 for the pocket and everyone would have been satisfied with the amount of food they had eaten.  So for just over $30, this would have been a fabulous breakfast.  For $40, it was still pretty darn good.