Awhile back, I posted about how I was very close to cracking under the pressure from my children to purchase a dog.  We had been searching out a hypoallergenic dog that wouldn’t cause Granuaile to itch like mad, tear like crazy, and proclaim herself allergy free, but sleep deprived.  Fortunately, Benedryl was a good remedy for sleep deprivation, too.

So, after interviewing potentially perfect pooches, I put it on the back burner until I thought we were at a point where the family could raise a puppy, give it attention, and properly train it.

And then there were two. 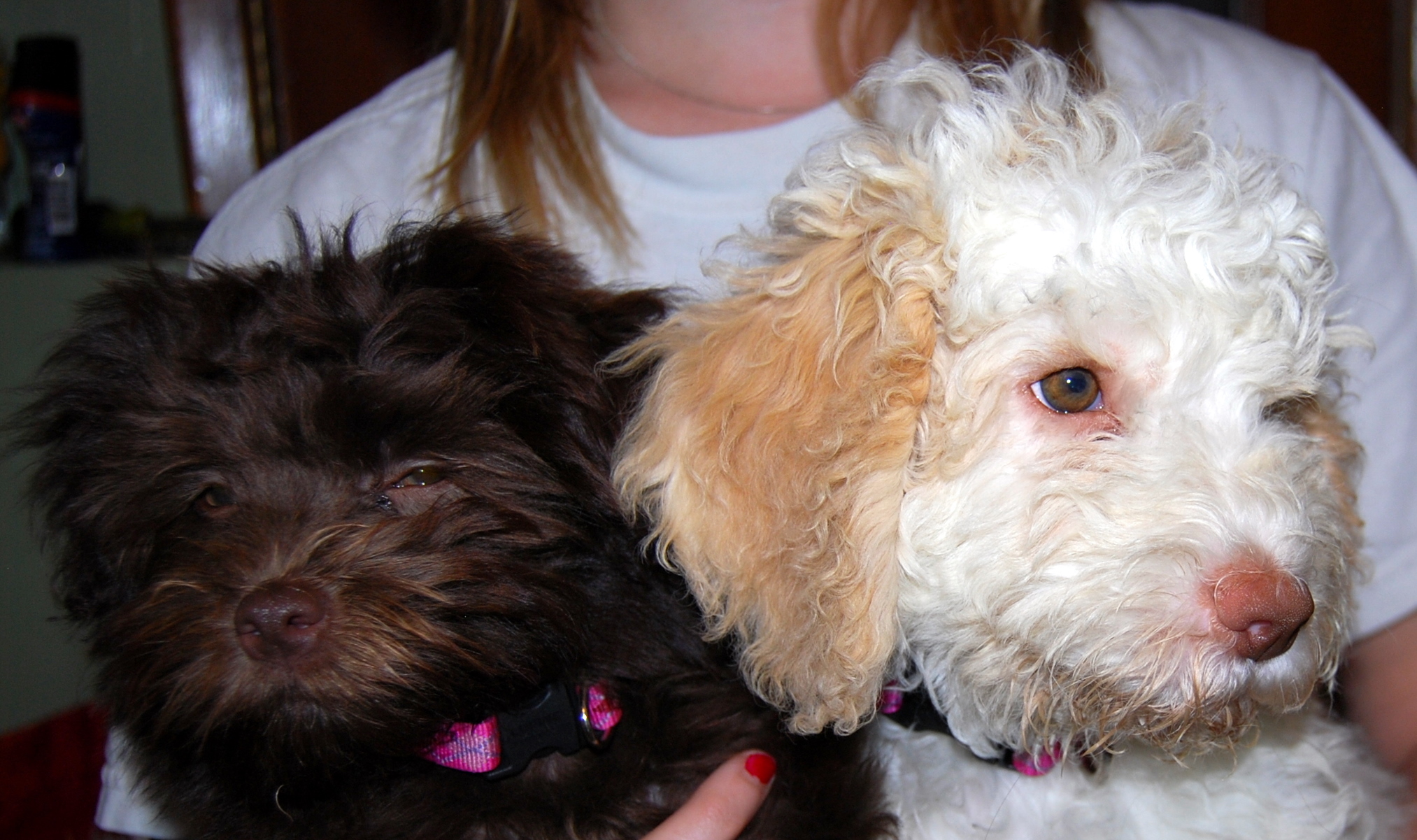 Harper the Havanese and Lusi the Lagotto

We found the Havanese puppies quite accidentally, as they don’t turn up on every list of possibly hypoallergenic dogs.  Right after finding them, we saw a Dog 101 clip on them from Animal Planet, and I was smitten.  I knew this would be the breed that finally caused me to cave.  We looked around, found a few un-reputable breeders and a bit of frustration, and then we found Harper.  She’s four pounds of pure adrenalin puppy power – keeping up not only with the kids, but with Jim, with me, with the neighbors, with her soap operas – she’s 110% energy, and the rest is pure personality.

Literally days after we decided to bring Harper home, Jim got an email from a breeder in Italy.  Jim had hoped to find a hypoallergenic breed that was a little bit bigger than the ones I was finding – one that he might be able to train and work with as a service dog.  We considered poodles, but having lived down the street from Mrs. Kelly’s kid hating, snarling, growling, nasty poodle as a child, I quickly removed poodles from the list.  (please write me and tell me how amazing your poodle is – I do want to know that they don’t all turn out to be evil, Satanic, snarling flesh eaters)  We interviewed an Irish Water Spaniel (epic fail on several levels there) and then the Portuguese Water Dog (Jim wasn’t terribly appreciative of their association with a democratic government), and then found the Lagotto Romagnolo.  Sweet, adorable, and nearly completely unavailable in the US.

Jim got on a waiting list, and, as this long story goes, just after we chose Harper, a Lagotto became available.  Jim jumped at the chance to bring Maria Luise (Lusi) to the United States, and she is now considered AKC Foundation Stock here in the US.  She’s loud and proud.  And Loud.  Did I mention loud?

And then there were two.  Oh, I said that already.

And I agreed that there should be two.

I know there is a padded room, waiting for me somewhere.

6 Replies to “Why Yes, This Does Make Me Certifiable. Thanks for Asking.”