I first became aware of the tragic story of the murders of three young boys from West Memphis, Arkansas through the HBO documentary Paradise Lost.  The program chronicled the horrific murders and mutilations of three 8 year old children and the process by which the community and the legal system very publicly convicted three teenage boys who were the types of kids who just didn’t fit in with the Bible belt community to which they belonged. 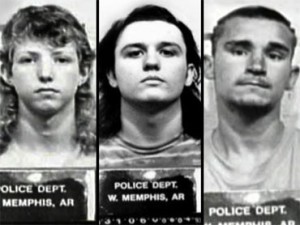 The murders occurred in 1993.  The convictions swiftly followed.

And Damien Echols, Jessie Misskelley, and Jason Baldwin have sat languishing in prison for all these years.  Their adolescence is gone.  Their chance at a normal life is gone.

And there was no evidence they were guilty.

Through the years, others have been suspected – including John Mark Byers, father to one of the victims; and most recently, Terry Hobbs, stepfather to another victim.  DNA evidence has indicated that hairs found at the scene – in the shoe laces used to hog tie the three boys – could belong to Hobbs and a friend of his.

But there is NO DNA evidence implicating any of the three teenagers found guilty.

The tide of public opinion ebbs and flows.  Even some of the families who were adamant in their belief that the three teens were guilty have come out publicly asking for the West Memphis 3 (as the teens came to be known) to be set free and the real killers found.

And it may happen today.

I’ll be watching for news; praying that the boys – who have lived all of their adult lives behind bars – are not forced to admit guilt in exchange for freedom; and hoping that the investigation into what happened to Christopher Byers, Stevie Branch, and Michael Moore continues.

It’s time to find peace for the six families who lost sons that day in Robin Hood Hills.  Let’s hope it happens.

One Reply to “Freedom For the West Memphis 3 Today??”