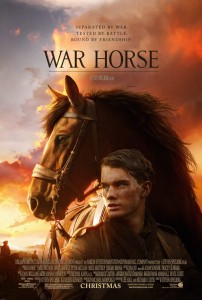 So Eilis and I went to go see the press premiere of War Horse on Thursday. I vaguely remembered seeing the trailer and it not looking totally awful (although maybe not interesting enough to warrant the purchase of a full-priced ticket.) But when she asked if I wanted to go I said sure. I have to say I was pretty impressed. The story is cutesy, as to be expected, but there were actually some very powerful and very funny scenes. The movie certainly does a good job of highlighting the multinational impact of the Great War, the humanity of the soldiers on both sides, and the hardships endured by troops and local civilians alike. It was a nice departure from the heavy, depressing movies being churned out a lot lately but not so light and fluffy that you wish you were sitting in one of those depressing movies. There were quite a few familiar faces, including Mr. Weasley from the Harry Potter films. The theatre was full of happy tears and sniffling at the end and several scenes even garnered a few cheers. Based on the trailer alone I probably wouldn’t have forked over the ten bucks but I can now safely say that if you’re looking for something the whole family can appreciate this holiday, War Horse is worth the Visa gift card from grandma. War Horse is in theatres December 25.